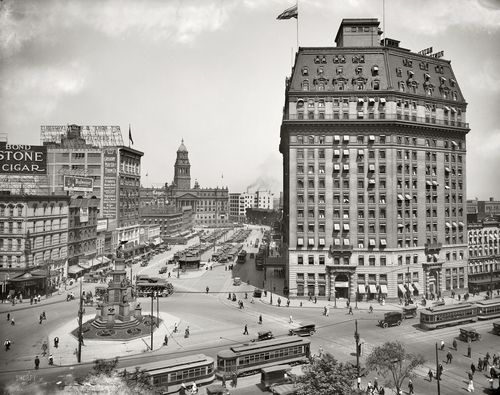 Would Detroit have been better off without Henry Ford? Mark Binelli, author of Detroit City Is the Place to Be: The Afterlife of an American Metropolis

, never asks this question, but it occurred to me while reading his account of how Detroit became the poster child of urban dysfunction in America. Without the auto industry Detroit may have turned out to be another Milwaukee. It wouldn’t loom so large in the public imagination, and it wouldn’t be free of its share of problems, but at least the property values would be stable.

In Binelli’s telling, Detroit has never been a genteel city or a model of urban stability. Founded by roguish Frenchmen in the early 18th century, Detroiters were content to be left alone in their muddy, non-description outpost in the primeval North American wilderness. Early in its history Detroit developed an insularity that would have profound consequences today: a virulent racism that still stings and a lack if interest in acquiring any municipalities beyond Eight Mile Road. Unlike many other American cities, Detroit never annexed its suburbs to sustain growth. A larger municipality may have helped Detroit avoid contraction in the twenty-first century.

The opening of the Erie Canal, followed by the discovery of copper in the Upper Peninsula, shocked the town into the industrial age, and for a while the city made a nice living making wood-burning stoves and paint varnish.

Then Henry Ford and the auto plants arrived. By 1919 the city was overwhelmed by a sudden influx of European immigrants and African-Americans. The city’s infrastructure was strained to the breaking point. African-Americans were largely consigned to Black Bottom (named for the quality of its soil), a neighborhood with the city’s oldest and most dilapidated housing stock. Prejudicial real estate practices ensures they would stay there. Prejudicial lending practices ensured they couldn’t improve their homes. By the time Detroit recovered from the boomtown mess the auto industry was past its peak.

The history of Detroit between the height of the V8 era to the present is a sad and familiar story. Binelli was one of many journalists who dropped in to report on the decay. What sets Binelli apart is that he is a native of southeast Michigan. His father ran a knife sharpening business in the city. Binelli is clear-eyed and unnostalgic. His Detroit is not the zombie apocalypse theme park of the popular press. He doesn’t drop in on the guy who sells raccoon meat for food. Yet he doesn’t flinch from the details of an American city threatened with extinction. Nearly everyone he meets in the city has some bullet wounds to show him.

Binelli is as much of a storyteller as he is a journalist. Detroit City reads like a historical novel, with the narrator deftly interweaving the history of the city with its present predicament. With so much material, Binelli is better when he moves the story along quickly. One vignette tells the story of a man who shot his gun in the air to scare away a burglar. When a weary police officer finally shows up, he advises the homeowner, “Next time, aim lower.” But another more in-depth story about urban farmers–about half of Detroit is uninhabited–drags on a bit too long. When Binelli is on his mark, which is most of the time, the book is a surprisingly gripping read.

At the end of his story, Binelli is honest enough to say he doesn’t know which direction the city is headed. He doesn’t think the city will remain “Detroit the cautionary tale; Detroit the forsaken; Detroit the city of outlaws and eviction and perpetual fire.” By the same token some hipster sightings doesn’t mean the city is on the fast track to become the Brooklyn of the Upper Midwest. However, sometimes despite itself, the city has always moved forward–not always in the right direction, but it’s never stood still.

It’s only a small exaggeration to say that Detroit once created the future of America. Now it has to create its own future.

Added, Friday, February 8, 2013: Mark Binelli has an update on the state of Detroit. Billionaires want to buy part of it and set up their own country with its own currency, the Rand.