For this week’s edition of Fun Friday, only two entries. One I’ve already visited and one I will be attending. 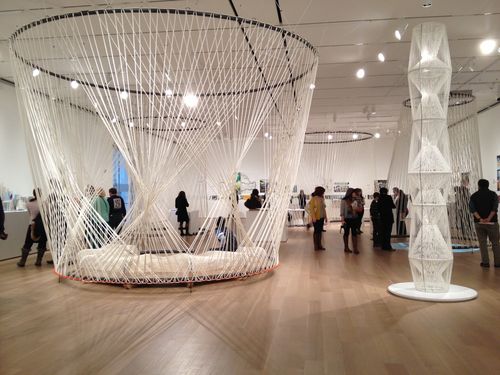 A couple of Saturdays ago I visited the Jeanne Gang exihibit at the Art Institute, followed by lunch at the Gage. It was a nice way to spend an afternoon. However, this weekend is the last for the Studio Gang exhibit. The materials were richer and more varied than I’ve seen in other architectural exhibits. You get a good feel for what the Studio Gang offices are like: lots of models and drawings all over the place. The exhibit is a snapshot of how architects put together ideas. Gang’s penchant for low-cost yet elegant solutions comes through in the rope partitions, the best solution I’ve seen to dividing up the rather awkward architecture gallery in the Modern Wing. If you go, be sure to see the section on the Kaohsiung Maritime Cultural and Popular Music Center project in Kaohsiung, Taiwan.

For me the biggest surprise of the Oscars was the snub of Paul Thomas Anderson for The Master. There was a lot of handshaking with Academy members on the film’s behalf, but no best picture or best director nominations came its way. Meanwhile, the film came and went in Chicago and I missed it. Luckily for me and other Chicago-area movie fans the Music Box has come to our rescue. Tomorrow night I will be attending a screening of The Master, which is screened as part of the Music Box’s 70mm Festival, which features, as you might imagine, films shot in 70mm, the analogue cinema’s richest visual experience. The Master screening tomorrow night is 7:30. Also highly recommended is Jacques Tati’s Playtime, a series of quietly humorous vignettes about American tourists looking for the “real” Paris only to find a modernist city of glass and steel.