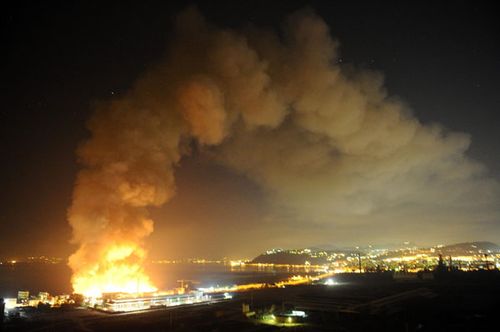 The City of Science building in Naples, Italy burned to the ground on Monday night. According to Ingrid D. Rowland, the fire was set by the Camorra, Naples’ home-grown crime syndicate. Rowland thinks the attack was a message to the city that it has no future, just an endless repetition of its poverty-stricken, crime-ridden present.

The conflagration is also a message to Italy as a whole and its clown democracy. The fire’s

message of brutality and despair is addressed to all of Italy. The Camorra’s message could just as easily have been sent by the Mafia, the ’Ndrangheta, or the Sacra Corona Unita, the local variants of a single large-scale criminal reality. As Italians sort out their stalemated election results, the country’s lack of a government is only too apparent. According to one recent government estimate, corruption now accounts for $60 billion of the annual budget, while another study finds that more than 10 percent of the GDP is produced by organized crime. From North to South, well-placed organizations are happily doing business in their own way, by their own methods. The most dangerous prospect for Italy right now is not ending up like Greece; it’s ending up like Mexico.

Giambattista Vico is dead and gone.