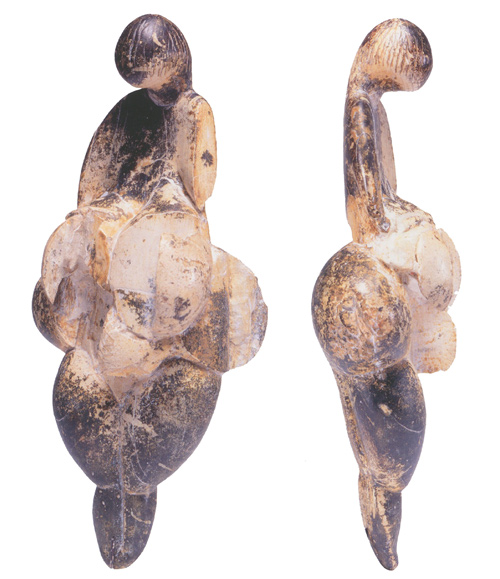 The true cognitive depth to the palaeolithic sculptures – their challenge, ultimately, to our anthropological schema – seems to me the way they suggest how self-loss and self-consciousness were intertwined. The movement of the new world of representations was at least twofold. One aspect (and that I have concentrated on the little figurines does not mean I have forgotten, or mean the reader to, that the overall image-world of the Ice Age is oriented to the bison, the mammoth, the horse, the cave bear, the reindeer, the wolverine) involved the invention, by the look of it somewhat suddenly, of more and more ways to bring the realm of animals up close, imaginatively – into being, into movement. The painters and carvers seem to have been intent on staging and immortalising the human animal’s familiarity with – maybe its dreamed-of inclusion in – a world where the ‘human’ was only a small part of the show. (In the painted caves, the very notion of human ‘viewpoint’ – certainly the notion of a unitary or focalising place-from-which-to see – seems deliberately put in abeyance. And this, after all, would have been in obvious tension with the imperatives of the hunter’s seeing-to-kill.) But all this new celebration of a wider world in which ‘I’ hardly figures is necessarily accompanied – here is what seems to me the implication of the last three decades’ mind-boggling finds, laid out so beautifully in the show – by a drive to depict the ‘human’, the not-quite-like-me, in all its shape-shifting concreteness and abstraction. The human ‘herself’, one might say.

The dramas Clark glimpses in the figures–their making and unmaking–tell the story of the human species becoming aware that they are small, frail bodies jostled by the herds of larger, fiercer animals. Yet, at the same time, it dawned on humans that they themselves were something that could be symbolized, an elaborate and constantly changing Other to nature and themselves.