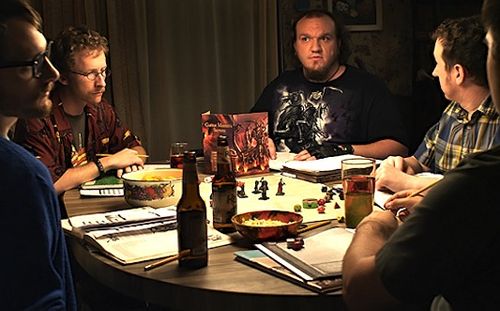 The music side of SXSW is becoming increasingly corporate, but the film side clings stubbornly to its myths of heroic outsiderdom seen through an ironic lens. Eric Kohn at IndieWire reports,

AJ Schnack and David Wilson's "We Always Lie to Strangers" finds an oddly compelling poetry in the irreverent rituals of singing families in Branson, Missouri. Though at first perceived as the cheesy vessels of the city's massive tourist industry, the subjects of Schnack and Wilson's portrait take on a soulful dimension by routinely explaining the values driving their multigenerational traditions; as with the bikers in "12 O'Clock Boys," who wax poetic about their gravity-defying talents, the singers in "We Always Lie to Strangers" make attractive arguments for committing to behavior perceived as foolish or impractical by the rest of the world.

The key movies in this vein is Katie Graham and Andrew Matthews' Zero Charisma (above), about a sad-sack obsessive trying to market a Dungeons and Dragons-style game of his own invention, and Harmony Korine's Spring Breakers, which you've probably already heard about. Taken together, these films, while they may be fine movies in themselves, are more about SXSW's increasingly tenuous claims to coolness or even relevance than they are about any larger trends in American culture.