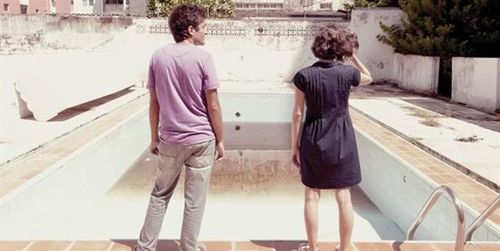 Post-colonialism has changed, but movies haven't kept up with the changes, at least until now. Phil Hoad asks,

So how does colonialism fit in terms of the European story today? Treatments zeroing in approvingly on the independence movements, such as, say, Gandhi, feel more like historical records, not corresponding directly to the blurred national borders and overlapped cultural interactions of the 21st-century. How can you aspire to be British, or French, or Belgian, or Italian, or German without brushing against the violence once committed in their name?

Perhaps the answers are audible in Portuguese. A pair of recent Lusophone films – appropriately for the language with the longest colonial history – have forged ahead in finding new routes for cinema to explore the subject. They deal with colonialism not by paving over it with the atonement story of multiculturalism, or with the kind of stern rebuke Michael Haneke delivered to that ideology in Hidden; but quietly and intimately – as an invisible pressure that weighs from deep inside on present-day society, culture and, ultimately, our inner selves.

The films Hoad points to are Tabu (Portugal, 2012) and Neighbouring Sounds (Brazil, 2013; still at top). All of the binaries of post-colonialism (imperial center and colonial margin, emigre and native soil) from 1960 until 2000 have blurred so much that it's reasonable to ask if post-colonial is still a useful critical concept. These two films seem to suggest that, at the very least, the way we talk about the relations between former colony and former colonizer have gotten much more complicated than before.