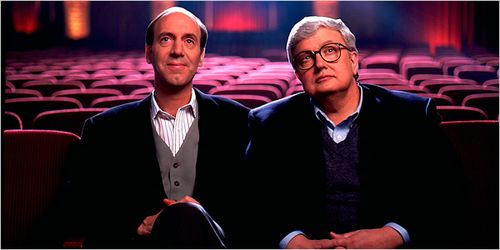 From the Tribune's Rick Kogan's obituary of Roger Ebert, the Sun-Times critic:

It was reviewing movies that made Roger Ebert as famous and wealthy as many of the stars who felt the sting or caress of his pen or were the recipients of his televised thumbs-up or thumbs-down judgments. But in his words and in his life he displayed the soul of a poet whose passions and interests extended far beyond the darkened theaters where he spent so much of his professional life.

The Pulitzer Prize-winning movie critic for the Chicago Sun-Times for more than 45 years and for more than three decades the co-host of one of the most powerful programs in television history (initially with the late Gene Siskel, the movie critic for the Chicago Tribune, and, following Siskel’s death in 1999, with his Sun-Times collogue Richard Roeper), Ebert died Thursday, according to a family friend.

Roger Ebert and Gene Siskel were the first film critics to whom I ever paid attention. I watched their original show every Saturday on WTTW. The controversial thumbs up/thumbs down gestures, to a novice cinephile, brought clarity to their arguments, which weren't always easy to follow. From them I learned that cinema could be a serious art form worthy of study. It's possible that I never would have gotten a PhD in film studies (along with English) if it hadn't been for that show.

After Siskel's death in 1999 Ebert began chasing dollars through the wilds of cable television, pairing his outsized personality with perfectly competent but colorless co-hosts. None of the weaknesses of Sneak Previews were addressed: the sometimes perfunctory way they proceeded through five films in half an hour or the refusal to frame the cinema in any other terms besides enlightened consumerism. Originally hired to cover the new anti-establishment films of the 1960s, Ebert became something of a huckster, his reviews getting repackaged into supermarket fare, as if he were trying to be the patron saint of Blockbuster movie nights. In his collaborations with Russ Meyer Ebert revealed weakness for the louche side of the film industry, something that Siskel never would have done. For a long time Ebert didn't seem like a vital voice in film criticism to me.

Over the past few years I've become reacquainted with him better through his Twitter feed and his blogs, I came to appreciate his warmth and liveliness, not to mention his forceful liberalism. I began paying attention to his criticism again. While it still seemed rushed, I was reminded again of his good taste (except for Meyer, who he seemed to have forgotten in his later years). It was hard not to allow the graceful way he handled his illnesses to color one's reading of his criticism and other writings. I don't know of any other film critic whose criticism is so closely linked to his personality–in a good way. Which makes it all the more saddening to learn of his sudden death.