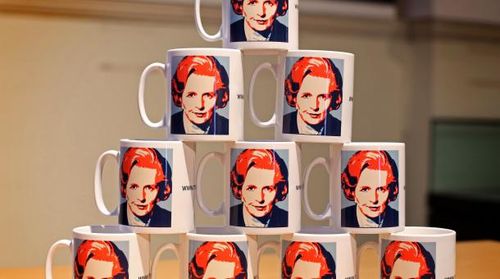 One of the ironies of the Margaret Thatcher era was that her presence in the Prime Minister's office was a boon to alternative British culture. Nowadays cultural imports from Britain are limited mostly to smart alecky caper films, dull Booker Prize novels, and Downton Abbey. There was a time, though, when British culture was inspired to do some great things by the widespread loathing of the Prime Minister.

A whole crop of terrific novelists emerged during Thatcher's tenure.

It's the paradox of her time in power that the most philistine PM for decades, who delighted in humiliating her arts ministers, saw a boom in bookselling (Waterstones), and publishing, plus the emergence of a new generation of gifted writers, from William Boyd, Kazuo Ishiguro and Hanif Kureishi, to Jeanette Winterson, Will Self, Jonathan Coe and Caryl Phillips, among many. Salman Rushdie paid her the back-handed tribute of putting her in his novel, The Satanic Verses, as Mrs Torture.

The films of that period were great, too, in no small part thanks to Channel Four, which funded many independent British film productions.

After the torpor of the 1970s, British film was waking up. It had something to be angry about. Public bodies like British Screen and the British Film Institute supported directors like Ken Loach, Derek Jarman, Mike Leigh and Peter Greenaway, whose The Cook, the Thief, His Wife and Her Lover was, arguably, a scathing political satire on greed and complacency.

Yet it was Margaret Thatcher's government which created television's Channel Four, whose film production arm gave us The Draughtsman's Contract and Stephen Frears's My Beautiful Laundrette. Later, this would morph into Film4, a powerful body which would much later create Danny Boyle's Oscar-winning Slumdog Millionaire.

The NPR program Marketplace ran a story on the rock music of the Thatcher era. The theme of the feature was the same as elsewhere: Thatcher stimulated cultural practices through contempt. The producers thoughtfully assembled a Spotify playlist of musicians spitting back at Thatcher.