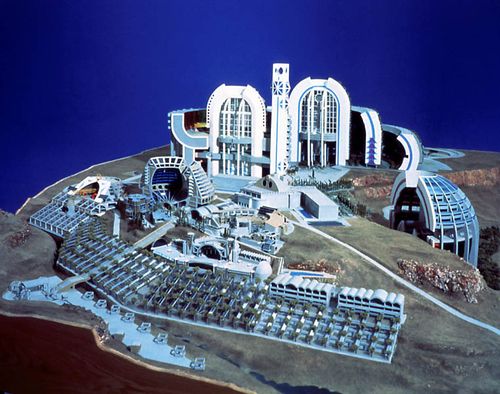 The architect Paolo Soleri died yesterday at age 93, only a year after retiring as head of Cosanti, his foundation supporting Arcosanti, a utopian community still in operation in the Arizona desert. Soleri had one idea, and he pushed it long and hard. The New York Times obit explains his theory of arcology, or the combination of architecture and ecology.

Dr. Soleri’s basic idea was that architecture and ecology are inseparable in their effect on people. In his view, technology always moves toward miniaturization, just as nature tends toward complexity and compactness. Human habitation, he believed, must also move toward more compact, multilayered and multidimensional spaces instead of scattering or spreading across the landscape.

With his beehive communities, Soleri was an intellectual descendant of the nineteenth-century utopian socialist Charles Fourier, whose phalanstères were perfect social and architectural units.

Walter Benjamin studied Fourier extensively, connecting the phalanstères with the Paris arcades. According to Benjamin, Fourier envisioned “a kind of labour which, far from
exploiting nature, is capable of delivering her of the creations which lie dormant in
her womb as potentials” – in contrast to the  ideology of early (and existing) capitalism, which “recognizes only the
progress in the mastery of nature, not the retrogression of society.”