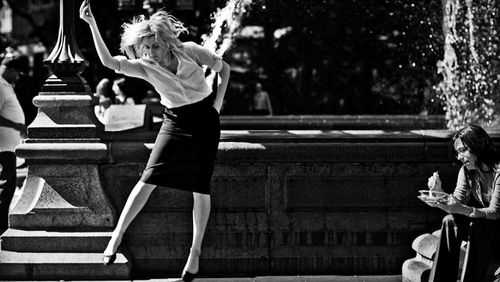 Noah Baumbach is shaping up to be the Alice Munro of American cinema: artfully telling the same story about the same people over and over again. Baumbach and Munro return obsessively to early adulthood as the first point at which a person begins to sense that some options have already been closed off. It's as if we have only one shot at  becoming truly ourselves and we always blow it.

Jason Bailey argues that in Baumbach's latest film Frances Ha the director offers a "quietly radical" solution to the familiar problems posed by the romantic comedy genre. Bailey calls the film "a rebuke to the entirety of female-centric mainstream film." The title character is too smart, and too self-conscious, to make the obvious choices.

Frances is kind of a mess, and she knows it as well as anyone. "I'm so embarrassed," she says at one point, as part of an apology, "I'm not a real person yet." She should be—she's 27 years old. But she can't disengage from her romantic notions of what her life should be. She works as an apprentice for a modern dance company, where she hangs on to the slimmest thread of hope that she'll work her way in. As long as she's clinging to that dream, the idea of getting a "real" (read: day) job is anathema. But you need a real job to make money, and when [her roommate] Sophie bails, Frances finds herself descending through a series of less-than-perfect living situations.

However, like Sartre's waiter who is too "waiter-esque," Frances constantly calls attention to herself as an unresolved mess, but there's something phony about her transparency. In her mind her "real" self is a dancer; she's just play-acting at working as an apprentice and being in a heterosexual relationship. Her awareness of her own inauthenticity is a kind of self-deception. She denies her own freedom to choose some other mode of being. She could, for example, become a dancer if she sacrificed enough.

Like Munro, Baumbach's subject is the anguish of existential choice at one particular point in one's life abstracted out all of the other choices one must make in the course of their lives. Frances remains youthful and attractive while denying to herself that she's an object in the world buffeted by other people's desires.