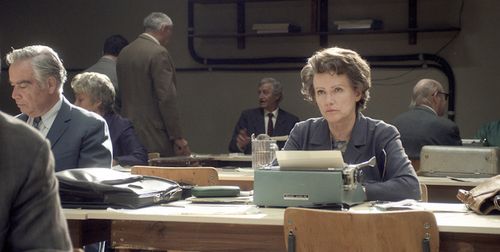 Reviews of the new film Hannah Arendt generally make two points: one, Arendt is the perfect subject for Margarethe von Trotta, whose Lost Honor of Katharina Blum (1975) remains one of the great political films of all time. Two, Arendt made a brilliant mistake in her commentary on the Adolf Eichmann trial in 1963. Arendt famously argued that Eichmann was too much of an idiot to be fully culpable, that he represented the "banality of evil" in which horror is thoughtlessly administered on a routinized basis. Among other things, Arendt was accused of absolving Eichmann for his crimes. (She also made some troubling charges about Jews collaborating with the Nazis.) Despite alienating many old friends, Arendt stood her ground like a good von Trotta heroine.

Arendt's argument in Eichmann in Jerusalem: A Report on the Banality of Evil is more complex than the movie reviews would indicate. She makes fine distinctions that are lost film (von Trotta has admitted as much) and, very likely, in the furious polemics the book set off when it appeared in 1963. As Judith Butler notes, Arendt agreed with the trial's verdict. Arendt disapproved of the trial's political context, which made Eichmann into the face of Nazism.

Arendt did not think that the history of anti-semitism or even the specificity of anti-semitism in Germany could be tried. She objected to Eichmann's treatment as a scapegoat; she criticised some of the ways that Israel used the trial to establish and legitimate its own legal authority and national aspirations. She thought the trials failed to understand the man and his deeds. The man was either made to stand for all of nazism and for every Nazi, or he was considered the ultimately pathological individual. It seemed not to matter to the prosecutors that these two interpretations were basically in conflict. She thought that the trial necessitated a critique of the idea of collective guilt, but also a broader reflection on the historically specific challenges of moral responsibility under dictatorship. Indeed, that for which she faulted Eichmann was his failure to be critical of positive law, that is, a failure to take distance from the requirements that law and policy imposed upon him; in other words, she faults him for his obedience, his lack of critical distance, or his failure to think.

It would be a pity if the banality of evil debate becomes the only thing anyone remembers Hannah Arendt for these days. It would also be a pity if Hannah Arendt and its great director get lost in the summer movie shuffle. It's good to see von Trotta back and in top form. She doesn't make enough movies.