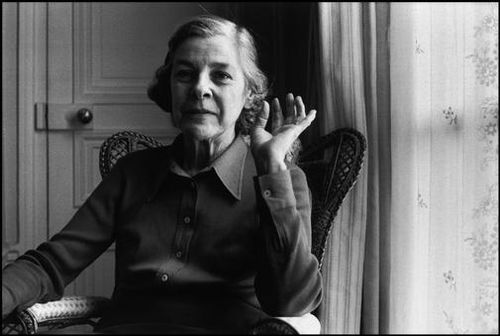 The movie Hannah Arendt features two relationships: the title character's love affair with Martin Heidegger and her relationship with everyone who hated her after Eichmann in Jerusalem. But there's another relationship in the movie that doesn't get its full due, even within the movie.

Hannah Arendt's friendship with Mary McCarthy (above) started off badly. One evening at a party, McCarthy, possibly a little drunk and therefore prone to blurt out half-formed ideas, said she felt a bit sorry for Hitler because he really, really wanted the occupied French to like him. Arendt knew that there's no such thing  as feeling a small degree of sympathy for Hitler. Arendt never uttered a half-formed idea in her entire life. It was four years before she spoke to McCarthy again. 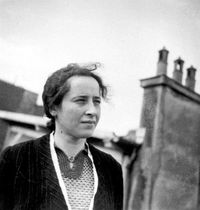 Writing in The New Yorker, Michelle Dean objected to Janet McTeer's portrayal of McCarthy as "blowsily silly." Silliness, however, is probably a good cinematic shorthand for how exasperating McCarthy could be.  McCarthy's apology that repaired her friendship with Arendt was characteristically flippant. "Let's end this nonsense," she told Arendt. "We think so much alike." The gambit worked. For a long time, Arendt was the only serious person who cared what McCarthy thought about anything. (To this day no one much cares what McCarthy thought.) Arendt let McCarthy read her manuscripts. They corresponded about domestic matters and fascism, common sense and the nature of fiction. Arendt called McCarthy's dreadful novel The Oasis "a delight." Most others in the circle of New York intellectuals in which both McCarthy and Arendt traveled, were repulsed by the novel and its author.

Arendt was more respected than McCarty, but not more well liked. Stubbornness was a common quality among New York intellectuals of the 1960s. Arendt's, though, was remarkable even in that crowd. Arendt dismissed her male critics as envious of her success. She was probably right, but that didn't endear her to her peers even before Eichmann in Jerusalem was published. Her nickname was Hannah Arrogance.

Perhaps Arendt saw McCarthy as a reliable ally in a world dominated by high-strung men, especially the irascible Saul Bellow, who never did formulate an insult that truly stung Arendt. Maybe McCarthy's brand of silliness, or whatever you want to call it, struck Arendt as more durable than the intense seriousness of Bellow, Lionel Abel, Alfred Kazin, and the other male intellectuals in New York. Absurdity always outlasts criticism.