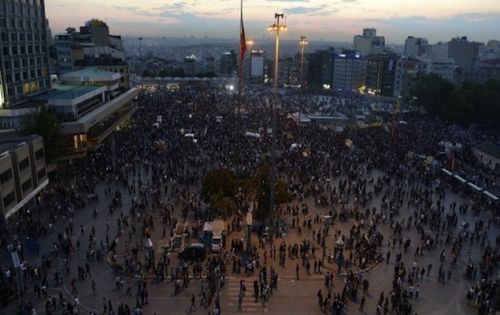 William Harris provides a long background piece on the Gezi Park protests in Istanbul. To Americans, the protests look more like Occupy Wall Street than the Arab Spring. There’s an important difference between the American movement and what’s unfolding in Turkey: the Turks are a lot better organized and have the potential to become an enduring political force.

The strength of the protests has been their pluralism, banding together labor unions, liberals, anti-capitalists, feminists and environmentalists. They’ve been able to combine critiques of each shade of Erdoğan. Meanwhile, in a major break from Occupy Wall Street, the protestors have been quite clear on their demands: to preserve Gezi Park as it is; to free those involved in the protests who have been detained (including more than 50 lawyers at an Istanbul courthouse and a number, more recently, of volunteer doctors); and to end the violent police repression of the protests. Perhaps Erdoğan’s absolute refusal to compromise can be traced back to these demands—or, if not to the demands themselves, then to the form in which they reached him: If people out in the street can influence policy, what might they ask for next?