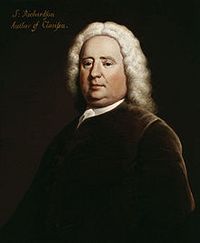 As a young woman Adelle Waldman was absorbed in reading Samuel Richardson's novel Clarissa (1747). At nearly 1,500 pages, reading it must have taken most of her youth. The thin plot and unhappy ending (rape followed by suicide) didn't deter Waldman from enjoying the depths into which Richardson plumbed his characters' inner lives.

Richardson's charms were more evident in his day. Critical opinion held him in higher regard than his contemporary and rival, Henry Fielding. Today that ranking is reversed. Fielding strikes us as modern in his energy and formal eclecticism, while Richardson appears ponderously didactic and moralistic.

Waldman, though, was a Richardson fan, a more plentiful species of reader than one would expect. James Wood is another. But recently Waldman found herself "in a state of rapture" while re-reading Fielding's Tom Jones (1749). The experience compelled her to reconsider the earlier self who was seduced by Richardson, Fielding's opposite number.

The reading I did in those years was incredibly meaningful. I don’t know that I will ever read so intensely, so hungrily again, and I did indeed learn a few things from those pronouncements about the human heart. But over the years, something has shifted in the way I read and respond to fiction. Humor has become a higher priority. I’ve become more sensitive to pleasures that are “merely” aesthetic — a well-turned phrase or an apt observation that sheds light into a particular character, even it isn’t of profound or generalizable import, even if it only gets something right about how a young servant would feel about leaving behind her gowns. And apparently I’ve become someone who can’t stop talking about how great Tom Jones is.

Waldman's account of her change in reading tastes is interesting on a number of levels. First, she'll convince you to read Tom Jones. (I would second the recommendation.) Second, you don't encounter many non-academics with such deep knowledge of eighteenth-century British fiction. Finally, she's very good at explaining how our reading is really a reading of ourselves, of how the stories we read are how we construct an identity.