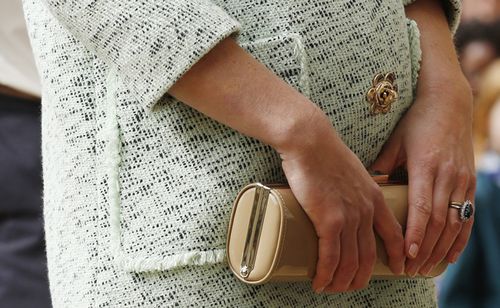 As everyone waits for news of the royal birth, which will be announced in a bulletin board, Emily Matchar reviews the fervid speculation about Kate Middleton and her body, culminating in her pregnancy. Hilary Mantel has made some tart comments about the Duchess, including this one.

"The royal body exists to be looked at," wrote Mantel. But the same is true about the female body in general.

The scrutiny Kate undergoes on a large scale is the same scrutiny nearly all women experience on a smaller one. Are we too fat or too thin? Is our hair shiny enough? Are we marrying too young, or not young enough? Should we Botox, condition, Clomid, circumcise, vaccinate, exfoliate, co-sleep, Dukan diet, Lean In or Lean Out?

According to Michel Foucault, however, until the Enlightenment, a king had two bodies. One was the natural body, which was subject to decay. The other was the aevum, a mystical, eternal body through which the dignity and power of the monarch transcended all misfortune, like Battle of Bosworth Field or Camilla Parker-Bowles. This sacral body symbolized the body politic as a whole. So, in a way, Kate's body is the body of all British women–symbolic yet subject to intense scrutiny for signs of decay in the nation itself.