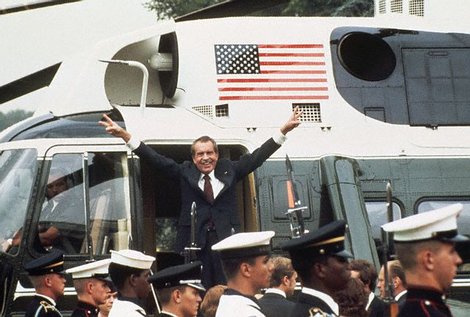 August 9 was the thirty-ninth anniversary of Richard Nixon's resignation from the Presidency. To mark the occasion the New York Review of Books has reposted some of its Nixon coverage. Most interesting of the contributors is Garry Wills in his review of Carl Bernstein and Bob Woodward's All the President’s Men. The review, "The Kingdom of Heaven," published June 13, 1974, appeared at a key moment in history: between the time that the facts about the Watergate scandal became evident as a whole narrative (except for Deep Throat) and Nixon's resignation. Missing from Wills' account are the terms guilt and innocence. Thanks to President Ford's pardon of Nixon later in 1974, there was no trial. So all we have is evidence.

Wills is always worth reading because of his non-polemical religious language. He casts the Nixon administration as "new Children of God" determined to remain separate, and above, the "other Washington" where Representatives pass out drunk on the floor of Congress. The narrative Wills sets up–here is where his prodigious learning comes in–is not of a fall from grace. Rather, it is an excess, a failure to realize when a crime is complete and, quite possibly, forever undetected. "Watergate is the story of a man who has just pulled off a million-dollar heist and gets caught when he hesitates to steal an apple off a passing vendor’s cart," Wills writes.

The cause of this blindness was the Nixon circle's antinomianism. "[P]recisely because one is not part of 'the world,'" Wills explains, "one can use the world’s worst weapons against it without being sullied. Indeed, one is obliged to do this, to protect the suffering saints who would otherwise be helpless before the world’s malevolence." Wills introduces another term to describe the Nixon administration's criminality. Wills calls Nixon the nation's "Ratfucker-in-Chief." The arresting term "ratfucker" originated, like Nixon himself, in Southern California. The term refers to the act of disrupting an opposing candidate's campaign, "getting the 'rats' all fucked up."

Once Wills has branded Nixon as a ratfucker and an "anti-politician," he brings up Woodward and Bernstein as classical reporters. Their investigative reporting for the Washington Post wasn't a counter-ratfucking enterprise. Wills is careful to point out that Woodward and Bernstein were innocents, sniffing out, like rats, "the sneaky little paths under out-of-the-way bushes" where the clues to the president's malfeasance lay hidden. The reporters had no political motivations whatsoever, Wills claims. Despite clues that Nixon himself was involved, Woodward and Bernstein refused to believe the president was involved until late in the investigation.

Watergate was a political scandal, but not a partisan one. Wills never uses the terms "Republican" or "Democrat." In Wills' account, the scandal unfolded at a higher plane of existence. In a sense, Watergate was the last political scandal involving an American president. The discourse that Wills had labeled as deviant in 1974 has now become standard in American politics. Today every whiff of impropriety leads directly to the White House. There's no time for investigations any more, only recriminations. The whole American political system is now antinomian.