Salon picked up on the Bookshelfie phenomenon, calling it "vanity for introverts," a snarky and inaccurate term. The Bookshelfie is a selfie with book covers. The format is simple. There's a self-portrait, taken with a camera phone, a brief commentary on the photograph, and a list of the books in the photograph. Sunglasses are optional, but highly recommended. 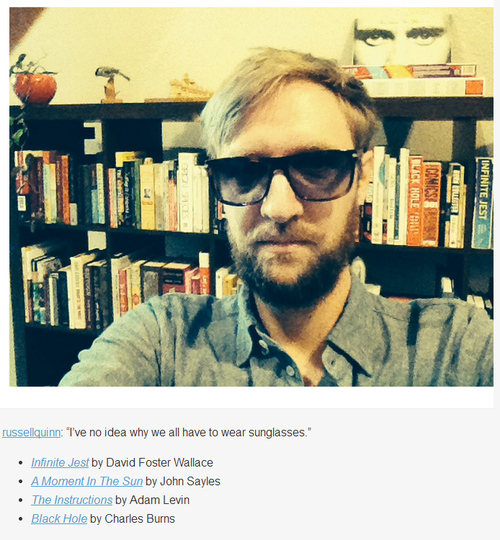 Most of the Tumblr entries are by people in their twenties, often considered to be an age of solipsism. But I don't see solipsism or vanity in the Bookselfie.

By the time one reaches one's twenties one has pretty much ceased to be the sole subject of a photograph. Children tend to be photographed individually being themselves–or rather, being more than themselves. A prop or two may appear in the frame, but the child is usually the center of interest.

As a person moves beyond the domestic sphere and enters the social realm, solo photographs disappear almost all together, to be replaced by photographs of the self with something, or more commonly, someone else. And once a person becomes a parent the likelihood that they will appear as the sole subject of a photograph goes down to almost zero. The more adult one becomes, the more they disappear into a swarm of images and words.