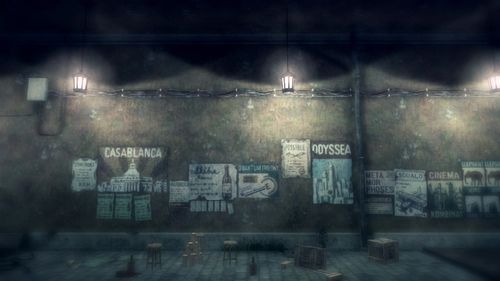 In Rain, you are invisible. The only time you can see your character — a small boy wandering a dark city — is when you venture out into the seemingly never-ending downpour. With a lead character who is not only invisible, but also mute, Rain's main appeal lies in its presentation: a haunting soundtrack coupled with dark and moody visuals make this an experience that feels more like a French film than a traditional video game. The adventure has you following the trail of a young, equally invisible girl, and attempting to unravel the mysteries of the monster-filled, people-free world. The end result is one of the most unique and beautiful experiences on the PlayStation 3.

Andrew Webster goes on to specify this PS3 game is like a silent French film, which, in itself, is reason to buy the game. He doesn't venture any titles, but Louis Feuillade's great serial Fantômas (1915-1916) immediately comes to mind. So does Alberto Cavalcanti's Rien que les heures (1926).