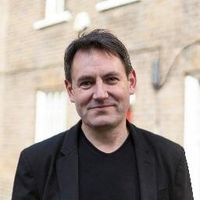 is set in a London home for writers enjoying the pleasures of exile, the sharpening of self and purpose that comes from becoming a stranger to one's own nation and language.

There we meet Mr. Stan, his body wrecked by Oedipal and political struggles. There's the genial Mustapha, devoured and spit out by his country's security apparatus. The playwright Ted Crumb stops by on occasion to complain about whatever comes to mind. These characters and others are watched over by Julian Snowman, the founder of the House of Journalists and a Pynchonesque impresario of paranoia.

The exiles, known as fellows, have survived virtually every abuse known to the post-colonial world: imprisonment, rape, street violence, torture, displacement, and loss of family. The fellows relate these experiences in elaborate and idiosyncratic ways. For instance, Agnes, a 23-year-old described as “hard-boiled,” which means attractive in this context, rolls her own cigarettes and writes poems about her decapitated lover.

Because of the gruesomeness of some of the content, there are distancing devices. Humor is one such device. An unmistakable metafictional scaffolding is another. The stories are remarkably consistent in their quality, although they don’t integrate into a larger narrative arc. Closure is achieved by a metafictional trick that may bother some readers. I like that sort of thing, so I was fine it with.

Calling attention to the fictiveness of the novel urges us to consider The House of Journalists as an allegory, that most artificial of fictional forms. Specifically, I read Finch's novel as an allegory of post-colonial experience. In this reading the House of Journalists stands for London the imperial capital. One function of the capital was to accumulated experiences and histories in order to classify and verify them—an operation that continues on in the House of Journalists. Once the British Empire stretched beyond the bounds of the national state. Now the empire has collapsed back into London, where a structure of voices tries to represent the unrepresentable. So while some readers may find the lack of a unified narrative or a conventional resolution, I liked Finch’s refusal to offer consolation for a world that is falling apart, one story at a time.