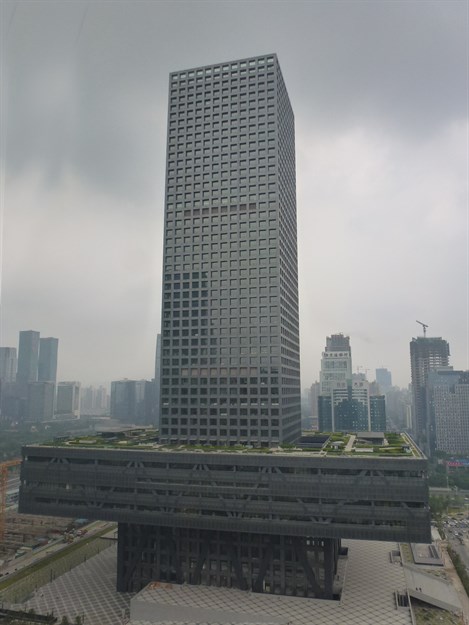 Ulf Meyer begins his first-hand account of Rem Koolhaas's Shenzhen Stock Exchange with a description of police making sure none of the locals touch the just-completed building. For me, however, the most telling detail of Meyer's account comes from the inside of the building. Some foyer walls are decorated to look like calligraphic landscape paintings but, Meyer notices, they're actually depictions of stock price fluctuations.

All buildings are based, in one way or another, on writing. The Shenzhen Stock Exchange building is not based on any Chinese writing. There is no writing here except Koolhaas's own, which is, as always, full of his intensely intellectualized contempt. For this Chinese tower Koolhaas deploys one of his favorite devices, the graft.  He combines Mies van der Rohe's McCormick Convention Center in Chicago and the Seagram Building in New York. Mies is just a signifier, though. Koolhaas is grafting the horizontal with the vertical and calling it Mies. Koolhaas has another name for the graft. The McCormick Center inserted into a tower is meant to invoke "speculative euphoria." 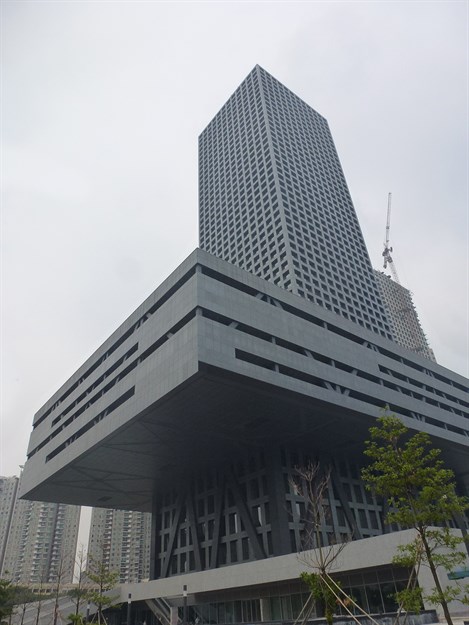 There's something about China that inspires Western architects to devise multi-layered metaphors expressed in structure. Thom Mayne's Giant Group Pharmaceutical Campus in Shanghai (2008), for example, is a "lifted landscape." Mayne's chthonian metaphor and Koolhaas's endless euphoria are meant to represent the grandeur of the new China, as if no one has ever seen the birth of a capitalist power before. Both metaphors create counter-metaphors of sudden, disastrous collapse.

Meyer sees a more pedestrian outcome for Koolhaas's tower. " The autistic giant buildings of Shenzhen, standing rather lonely on their sites just do not find together to form a city. Koolhaas has now added his architectural legacy to Shenzhen. In five years it will be considered old."