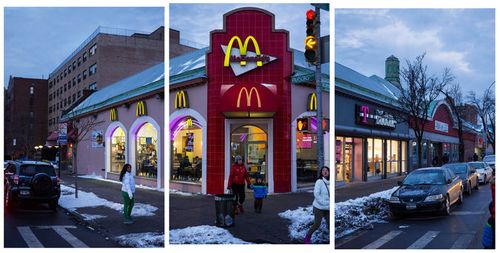 The guy in the cubicle next to me is a few years away from retirement. He knows, to the day, how much longer he has. At least once a day he pops his head up and updates me on his retirement plans, which revolve around a golf cart. A couple of weeks ago he went on reconnaissance missions to McDonalds and Panera Bread because he noticed that seniors tend to gather in these places and socialize. He wanted to know if he could be one of those retired guys who kills an afternoon nursing a McCafé and shooting the breeze with old people he barely knows.

Michael Kimmelman did his own reconnaissance mission to a McDonalds in Queens, which is apparently Brooklyn for people on Social Security. He found a McDonalds habituated by older Korean men and asked, "But why that McDonald’s?" Channeling William H. Whyte, Kimmelman discovered that Korean men want to put on their jackets and walk a few blocks to the local McDonalds to chat with their friends and sip on a cup of coffee, for hours. They're harmless enough, but they drive McDonalds managers crazy.

But what's the alternative? The Korean bakery, where they used to hang out, closed. The library is too faraway and really more of a kids' space. There's a community center with a space sanctioned for retirees with a lot of time on their hands, but it's in a church basement and they have to take a bus to get there, but when you have no responsibilities yet no freedom, submitting to a bus schedule is tough to swallow. Besides, who can have an open conversation in a church basement, with God upstairs?

Kimmelman identifies the Flushing McDonalds (image above, from the New York Times story) where the Koreans gather is a NORC, a Naturally Occurring Retirement Community, a term that makes it sound as if, like a cluster of mushrooms growing in an empty lot. old people flourish in conditions most other organisms would find inhospitable. But the McDonalds phenomenon, it seems to me, is more like a storytelling community in which, to use Walter Benjamin's terms, old men gather to exchange experiences that go something like this: even though I'm very far away from home, I have cheated death one more day.

And what did my cubicle neighbor discover? Panera Bread has a better class of old people. And more women.