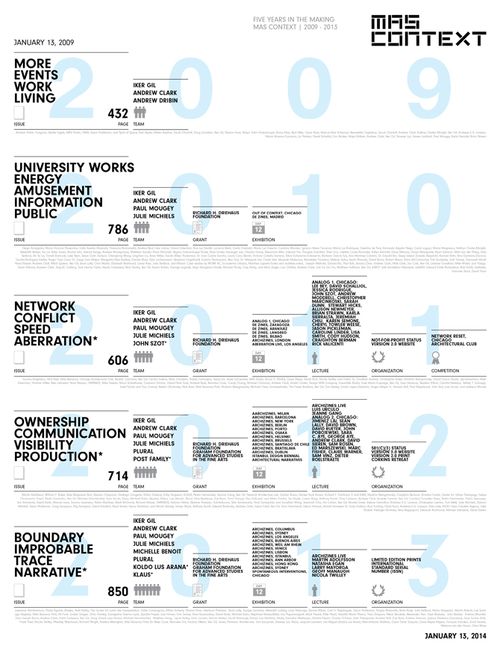 MAS Context is celebrating its fifth anniversary. It started as a quarterly online journal published by MAS Studio. Each issue is organized around a common theme, always stated in one word emphatically stated in all caps. Editor-in-chief Iker Gil and his team, building on the collaborative nature of MAS Studio, wanted to provide a forum for exchanges across disciplines. In particular, the mission of MAS Context is to open up architectural discourse to outsiders. As Iker Gil writes in the preface to the BOUNDARY issue, in perhaps his most impassioned introduction, "We remove ourselves from larger discussions that would not only benefit from our expertise and point of view, but also enrich, or even change, our approach because of the expertise and point of view of others. I believe that these conclaves and collaborations can only lead to better and more relevant work."

Architecture is driven by a combination of hermeneutics and will to form, but it's also been driven by a will to reform, questioning its alliances with capitalism. MAS Context specializes in examining the nooks and crannies of design, the places in which architects' desire to do better win out over their need to make money. The PRODUCTION issue is typical in this sense, paying more attention to craft than mass production. The SPEED issue addresses the ways in which designers and their clients struggle to catch up with the rapid pace of change in the global economy. Architects José María Ezquiaga and Juan Herreros recount their efforts to catch up with Madrid, a city that seems to change too quickly (trendy restaurants are now fully booked) and too slowly (26 percent of the working population is still looking for a job). Gil's interview with Elizabeth Redmond, founder and president of POWERleap, in the ENERGY issue, for me, was one of the most memorable features in the journal because of the idea that electricity could be generated by people running to catch an airplane. Why are people more interested in counting their steps with a wristband than capturing the energy of the crowd? 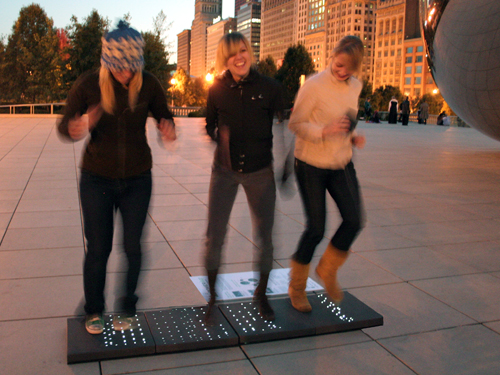 Another theme in the MAS Context issues is the problem of representation. Is a building the product of the brief and the requirements given by a client? Or is a building an expression of something deeper, like the idea of a home? The TRACE and VISIBILITY issues examine the Benjaminian idea that a different world can be found in the variegated remnants of daily life.

NARRATIVE, the latest and most meta issue, grew out of a MAS Context event, an increasingly important medium for the journal's mission to enable dialog between designers and non-designers. I've attended several of these events and without fail I've come away with a deeper understanding of how architects work. I've also had fun. Some of them are structured, like the lecture series at the Instituto Cervantes of Chicago, while others are exhibits that allow for more active exploration, such as when Studio Gang allowed a bunch of strangers, including myself, to snoop around their office. I'm pretty sure we didn't break anything. There are a lot of online architect journals. Many of them are largely concerned with publicizing architectural projects. A few journals move beyond publicity to take a more critical stance toward architecture and design–Design Observer is one example that comes to mind. However, they're structured like traditional journals, with staff members dominating the content. Their perspectives remain more or less fixed. MAS Context, by contrast, allows architects, designers, and others interested in the social and historical dimensions of design to speak. Each issue sets a stage upon which contributors examine the contexts around the act of designing objects. Jody Brown likes to joke about the isolation of architects, who, in his vision, have only their angst to keep them company. Architecture in MAS Context is not only engaged in the larger world, but immersed within it.

Keep an eye out for calls for papers, which I'll try to pass on. And, most importantly, read MAS Context.