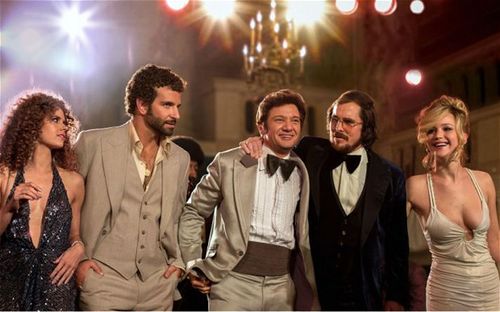 Although American Hustle seems unlikely to win a best picture Oscar this weekend, I will be rooting for it. As a period piece, it's less noble than 12 Years a Slave, but it has a better script and is a lot more fun to watch. The film captures not only the strangeness of the late 1970s, but also the pervasive desperation of the time. I was in high school at that time, and while I barely paid attention to Abscam–it seemed like a tawdry reprise of Watergate–I recall the sense of gloom my parents expressed at Paul Volker's crushing interest rates of 18% and more. In the depressing economic conditions of the time, hustling was as much of a coping strategy as it was a means to jimmy the system in one's favor. The New Deal was effectively dead, and with it died any chance that populist politics could affect capitalism for the common good.

Carmine Polito, played by Jeremy Renner, is based on Angelo Errichetti, the mayor of Camden in the unlucky days after RCA and Campbell's Soup abandoned the city. Polito wants to open a casino in Atlantic City, just as Errichetti did, but there is no money to be found. “The goddamn bankers," Polito complains. "Keeping their money on the sidelines. How we supposed to get anything done?” Polito manages to raise the money by illicit means, and for a moment, everything comes together in one great carnival of fraudulence as con artists, Federal agents, politicians and mobsters gather in an Atlantic City casino as the Bee Gees play "How Do You Mend a Broken Heart?"

American Hustle is all raucous surfaces, depicting a moment of pure artifice that will shatter once the new Darwinist economy is fully revealed by Ronald Reagan. Russell's characters bristle with desires, but their objects of desire are taking increasingly unrecognizable forms. Polito may be a canny big city mayor, but he's baffled by the first rich Arab he meets (actually a Mexican-American Federal agent disguised as a sheik). Rosalyn Rosenfield calls her new microwave "the space oven," as if she expects an alien to appear in her kitchen munching on microwave popcorn. No less of an oddity is the Atlantic City casino itself, a Las Vegas-style structure marooned in the land of machine politics and organized labor. These things appear strange only against the backdrop of laissez-faire capitalism, the new nature that is about to take over the world of the American middle-class.

To this day we're all still hustling, except now it seems natural.