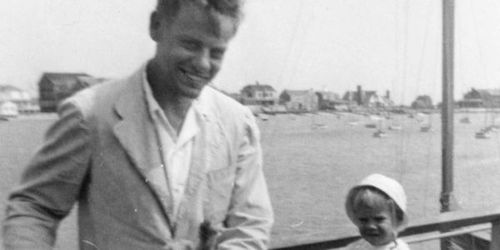 In the 1970s and 80s Paul de Man was one of the most famous literary critics in America. He taught at Yale when it had the best literary studies programs in the United States. A close friend of  Jacques Derrida, de Man was instrumental in bringing Deconstruction to America. His writings, though, were very different from Derrida's. If you didn't know he was a Deconstructionist, you would have a hard time recognizing it.  De Man's criticism was subtle, measured, and quietly authoritative. He read Walter Benjamin widely, and while I don't agree with his published remarks about Benjamin, de Man was instrumental in introducing Benjamin's work to American readers. When it was revealed, four years after his death, that he had contributed to a collaborationist journal during the Nazi occupation of his native Belgium, it was a shock. It was like discovering a favorite high school teacher had been a guard at Buchenwald.

. The biography has re-ignited the controversy  that first erupted in 1987, four years after de Man's death, when a young Belgian grad student named Ortwin de Graef discovered de Man's contributions to the journal Le Soir, or as Belgians referred to it, Le Soir volé, or the Stolen Evening. Mostly de Man published book reviews, but from time to time he mused upon subjects such as setting up "a Jewish colony isolated from Europe," which, he assured his readers, wouldn't have "deplorable consequences" for European literature.

A number of friends and colleagues of de Man came to his defense. None were more prominent than Jacques Derrida, who published a 30,000-word cry of pain in Critical Inquiry. De Man's death in 1984 had devastated him, for de Man had been Derrida's most important ally in the United States. The revelations about de Man's wartime writings was another blow, and not only to the memory of his friend. Many suspected that the attacks on de Man's wartime writings were also an attack on deconstruction itself.

Twenty-seven years later, along comes Evelyn Barish with an attack that looks a lot like 1987 all over again. Barish briefly worked with de Man at Cornell in the mid-1960s, but she seems to have little interest in (or understanding of) de Man's work until 1987.

In her review of Barish's book, Susan Rubin Suleiman notes that Barish has done her homework on de Man. "Admirably, she has consulted far-flung archives, pored over unpublished documents, conducted interviews with dozens of de Man’s relatives, friends and acquaintances." However, in pulling together her research into a coherent life story of a man Barish describes as "a shape-shifter" who was "an enormously persuasive reinventor of himself," she descends into the same sort of ambiguity and irresolution that the Deconstructionists were accused of projecting onto texts.

For example, based on very circumstantial evidence, Barish insinuates that de Man impregnated Mary McCarthy. Barish also claims de Man was involved in an attempt to launch a sort of fascist Vanity Fair, but never cites any real evidence that de Man was responsible for it. Suleiman takes Barish to task for her faulty understanding of French, remarking, "The reader is asked to take a lot on faith, starting with faith in the author’s judgment and in her knowledge of language and history."

Peter Brooks is also unconvinced by Barish's claim about de Man impreganting McCarthy, as well as several other of the biographer's claims. Brooks accuses Barish of turning de Man into a character in a Patricia Highsmith novel. Barish depicts de Man's rise from an impoverished immigrant to Harvard Ph.D. as an elaborate con involving forged transcripts, unpaid debts, and bigamy. Brooks offers another interpretation:

One might consider this a story of remarkable survival and success following the chaos of war, occupation, postwar migration, and moments of financial desperation: without any degrees to his name, de Man had impressed, among others, Bataille, Macdonald, McCarthy, and Levin, and entered the highest precincts of American academia.

Of course, this remarkable story begins with a stint at a collaborationist journal. So many people helped de Man along the way. Why didn't he come clean about his past?

Brooks claims that de Man did, more or less. In 1987, after the revelations about de Man's past, Brooks enters the de Man story.

I received a letter from Harry Levin. He had been my teacher and dissertation director at Harvard, but we hadn’t been much in touch since then, so the letter came as a pleasant surprise. Levin wrote that he wanted me to know that Paul had made a “clean breast” to him and Professor Renato Poggioli concerning his past at the time he entered the Society of Fellows, and that this information had then been passed on to Henri Peyre, Sterling Professor of French at Yale, at the time of de Man’s appointment to the Yale faculty in 1971.

De Man both over confesses and under confesses. He assumes more guilt than he was actually  responsible for, yet he never reveals the editorial content of the journal for which he wrote. He wanted Yale to know he was guilty, but not of which crime.

De Man's mature critical philosophy can be seen as an oblique penance for his youthful dalliances with fascism. He called himself a philologist. The differences between philology and literary criticism are indistinct, but in de Man's case philology meant someone who attended to the structure of language before meanings can be construed. This position required de Man to become an intensely self-conscious reader. Every serious reader should learn to observe himself or herself reading. De Man adduced an additional step in the process of interpretation. Until you understood how language works, he believed, you could not understand how power works. He told an interviewer shortly before his death, “I have always maintained that one could approach the problems of ideology and by extension the problems of politics only on the basis of critical-linguistic analysis.”

This approach could obscure the workings of politics by placing it where it's too much trouble to detect. At the same time, de Man's approach could indict him. By writing for Le Soir during the occupation he would be directly participating in the formation of fascism, even when he was doing something as innocuous as evaluating Continental poetry.

We may never know the truth about de Man's life. Certainly there are doubts about Barish's version of it. If we can reach any conclusions about the strange life of Paul de Man it would be that we can only know someone else as a text–a collection of everything a person has written, said and read. Every reader sees a different person. This is particularly true of the dead.