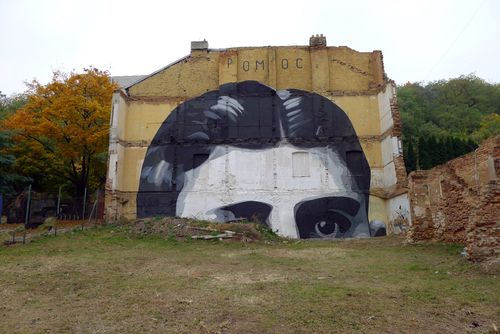 Franz Kafka has become the name of a warehouse of old interpretive techniques. On one floor are studies decoding myths and allegories, the last bastion of a mode of reading that has become outdated. On another floor are the Freudian psycho-sexual diagnoses of Kafka's inability to marry and the vaporous presence of women in his fiction. At the top level are all the prophetic visions of the bureaucratic, totalitarian nightmare to come. Can another box fit into the warehouse?

That's the question raised by Cynthia Oznick, who wants to see Kafka as a purely literary being, which is to say pretty much like a bug, except, unlike Gregor Samsa, he's set loose on the city of Prague. Oznick wants a Prague before the Kafkaesque descended upon it, when the city was a steampunk version of a city we'd like to live in today: vibrant and diverse, human-scaled, with the melancholy glamor of a city under a dying empire. Kakfa's Prague, in other words, is what would happen if Romanticism evolved directly into Modernism without all the puffed-up, fussy Wilhelmite culture in between.

Oznick sees a Kafka who comes into focus through the rich quotidian details of his life in Prague. But even this view, as refreshing as it might seem, is another appropriation of Kafka. Oznick has a long-standing and unseemly hostility to academic critics, who aren't fully responsible for the Kafkaesque. In fact, professors started losing interest in the Kafkaesque in the late 1980s, around the same time as they started to abandon that other great myth of Modernism, the Joycean. The mythic spell has already been broken.