The Brooklyn-based artist Leslie Lyons first appeared in this space in 2010 when I wrote about her exhibition Instant Messaging. Currently Lyons is participating in the exhibition Press: Artist and Machine at the Kentucky Museum of Art and Craft. Her contribution to the exhibition is BANK, from Unswept Floors, a series of works based upon ancient Roman artifacts.

I posed a series of questions to Lyons about her contribution to the Press exhibition. During our conversations, which were conveyed over email, we pulled in two more key figures: Joey Yates, the curator of the Press exhibition, and JB Wilson, Lyons’s collaborator on the Unswept Floors series.

How does the Press exhibition fit into the history of the printing press?

Yates: The ultimate goal with Press: Artist and Machine was to exhibit a multitude of ways that artists have combined their practices with the printing press. Through our display of over 60 works we reflect on the word "press" as both a noun and a verb. Beginning with the visionary work of William Blake and the artisan revivals of William Morris we move into the 21st century to take a look at the ongoing work by contemporary artists who have likewise exploited the machine press to explore issues related to politics, identity, art history and the changing landscape of mass communication.

Yates: As contemporary art practice expands, taking on more and more terms, the field grows with respect to new technology and global shifts that look not just at western ideas of art and craft but how other cultures have historically made less distinctions between the two modes of creativity. In American culture it could be said that contemporary craft practices have actually made more of an impact on contemporary art as in the case of Judy Chicago and other combinations of art and activism that grew out of the sexual revolution of the 1970's and the protests from Act-Up in the 1980's. These shifts in art were lead not by individuals, but by collaborative efforts among artisans from multiple disciplines, like quilting and graphic design, as well as non-artists who were skilled in organizing important rallies, demonstrations, and performances that created a new awareness in how culture is made and disseminated.

How did you get involved in the exhibition?

Lyons: When curator Joey Yates sent an invitation to present work in the Press, Artist and Machine exhibition, he included his treatment for the show. I was most intrigued by the context and social practice aspect he would feature using work by William Blake, Kinji Akagawa and other practitioners of art as it served function. He was taking both the physical action of the printing press and also the idea of it as it related to culture and knowledge. At that time, I was developing a series with the artist JB Wilson called the Unswept Floors, which reaches back to an ancient Roman practice of tile mosaics. These floors would be commissioned to portray table scraps that had fallen from the extravagant dinner parties featured in the more prominent villas around Rome. I recently photographed one in person when I visited Rome in April. It was recovered in the 1960’s and is housed at the Vatican Museum. You can learn so much from this kind of material culture and what appeals to me isn’t that these floors were celebrated as high art back then; they were functional but served as art and a status symbol. Not only could the hosts throw lavish parties and import exotic food but they could hire an artist to portray the waste. They flaunted their decadence – even privately.

Wilson: Research on American culture is at the heart of my practice and that is what excites me most about the Unswept Floors series.  Exploring and commenting on decadence using the medium of tile and what we discard onto the floor is inspiring; especially the simple act of the celebration of that decadence by producing the work itself.  That is what fascinates me most about the original Unswept Floor mosaics that we have referenced and what Leslie shot on her recent trip to Rome.  Obviously, the wealthy Romans who could afford to commission mosaics into their home could choose whatever they wanted as the content.  It was the choice to display wasted delicacies as a statement of excess for the purpose of celebrating wealth and power that turns me on and reveals something about their culture.

Here in 21st century America, I would say we are more reserved socially than the Romans may have been.  But there are still excesses and powerful, wealthy people who indulge.  I am moved as a contemporary artist to look through an ancient lens into our contemporary social systems and produce modern Unswept Floors. 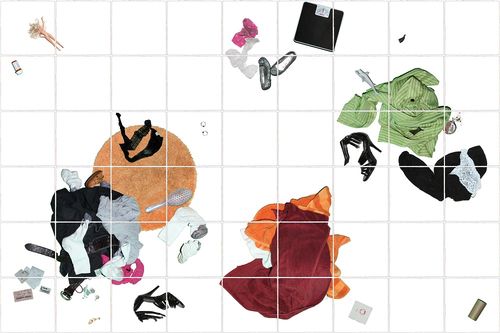 Lyons: JB and I had been making these floors with the modern process of sublimation using photography. One, Bathroom Floor, was exhibited in Miami during Art Basel in 2012 but we had not yet secured a gallery show to convey the larger idea of this practice. Conceptually, we loved feeling connected to this ancient idea and felt that there were similarities we could convey between the Roman era and notions of decadence in America today. We began exploring both particular evidence we could use as social commentary as well as our own personal lives since the Unswept Floors were literally a home decorating idea. But we also decided that making the work ourselves was going to be important. As a photographer, I had been wanting to use images in a new way and apply them to a more inter-disciplinary practice. JB was already working in tile and owned the actual machine press to make the image transfers. So, we began producing the work and I think this combination of idea coupled with the fact that we physically press the tiles ourselves made the work attractive for the Press exhibition. 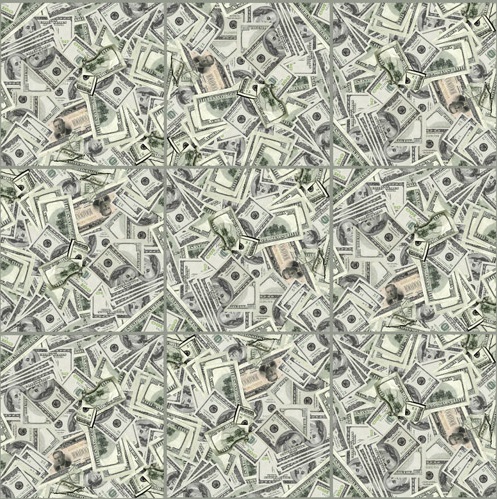 What we decided to present and what Joey also chose was the BANK tiles series from the Unswept Floors. This isn’t a tableaux like Bathroom Floor, which consists of 54 tiles and lays out a specific scene from our personal lives. It is one full bleed image transferred to 12” x 12” tiles then randomly placed and grouted together. The installation in Press is a 64-tile piece. This work takes on our current complicated relationship with money as a society. It features a multitude of $100 dollar bill(s) and a $100,000 which was in circulation at one time between the big banks to make large transfers. The design aspect when the installation is viewed gives an overwhelming sense of wealth. But the layers for us as artists, conceptually, break down to our comment on this idea. The $100 bills are actually only one bill with the same serial number so the images convey a false sense of wealth – it isn’t real. And the $100,000 bill is very significant because it features Woodrow Wilson, the president who signed the Federal Reserve Act of 1913. Wilson was quoted later saying “I am the most unhappy man. I have unwittingly ruined my country. A great industrial nation is now controlled by its system of credit. We are no longer a government by free opinion, no longer a government by conviction and the vote of the majority, but a government by the opinion and duress of a small group of dominant men.”

Lyons: From my end, I am foremost a journalist, always looking for the story and seeking out the social angle and implications.

I began researching how to go about accessing a $100,000 bill and getting someone to agree to let us photograph it.  JB indulged me for a few weeks then diplomatically reminded me that we live in a time where we could access this image in a matter of seconds.

This is a truthful fact but also honest in relation to JB's work.  My introduction to him was through his series, I Am An American, where he compiled hundreds of appropriated images into large-scale light boxes – each making their own comment on American culture.

So, we grabbed an image of the $100,000 bill off the Internet and claimed it as process.

Wilson: We found the $100,000 bill on Wikipedia as appropriation is part of my practice. I realize that appropriation is a bit of an issue with art these days but it is a reflection of how the majority of people in our culture assimilate information in the 21st century which makes it a valid resource for art, in my opinion. Because of this, for me, it is truthful in my practice. We have the world at our fingertips and this applies to art. Lyons: [The Woodrow Wilson quote] makes me think of the author, Michael Lewis. I love his books. My father played in the NFL so I practically inhaled The Blind Side. But it is his first book, Liar’s Poker, that relates to BANK. Michael Lewis graduated from Princeton with an art history degree then became a financial analyst with Salomon Brothers. He left to write Liar’s Poker which, just by the subtitle should tell you mostly what the book is about. The full title is called Liar’s Poker, Rising Through the Wreckage on Wall Street. I read the book but it was an interview with Lewis that really struck me. He seemed to write Liar’s Poker as a warning to the calculated recklessness of Wall Street and bond trading. It was an awakening to Lewis that less than scrupulous people on Wall Street could take advantage of others ignorance and become extremely wealthy. But, he said, when the book was published people didn’t react by wanting to clean up the financial industry. Instead, he had students in MBA programs all over the country writing to him asking ‘How can I get in on this?’. Amazing, right? What does this say about our culture? Our interdependence on one another? Our responsibility as citizens? I am still trying to answer these questions and BANK is a manifestation of this inquiry.

Actually, it is this idea of art as inquiry that seems to connect all of the work in the Press exhibition for me.