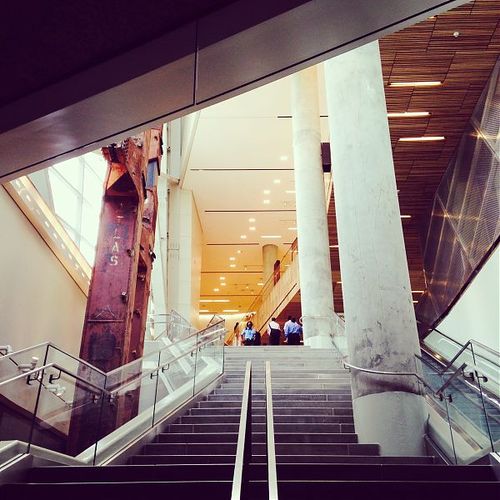 A view of the entrance pavilion. Photo by Alexendra Lange.

As I descended the ramp, past the map of the routes of the planes on 9/11, under the sound cloud of voices telling the story of the planes, overlapping, an international chorus of narrators, past the map made of words projected on panels, all I could think of was Orpheus descending into the underworld. It was dark, one could only go down, and one had the sense of steeling oneself for what was to come. I wondered if that ramp would be a trail of tears: how long could you last without crying or feeling faint? The jumpers? The slurry wall? The faces? I read every one of the New York Times profiles of those who died on 9/11. It felt, in those weeks after the attack, like the least a person could do. But would I want to enter the south footprint and dwell among those faces, those stories, again? Not now.

The experience of visiting the museum, for someone who lived in Brooklyn when the towers were attacked,  felt "like my arm was being twisted to remember better." Her memory had been shaped by the slow recovery of New York City from the attacks. The museum's "grandiosity and redundancy of  . . . vast spaces" forced her into a non-cathartic form of recollection. Her description never makes the museum seem mawkish, but its bloated, incoherent architecture reflects the burst of public sentiment that came to be manipulated in ways we now regret.