The Neue Gallerie's exhibition, Degenerate Art: The Attack on Modern Art in Nazi Germany, 1937, chronicles the Nazis' famously botched attempt to rid Germany of all art that didn't look like something Hitler would like. It's not a big exhibition, but no matter. The exhibition's purpose is simple: to show the awfulness of Nazi art and to remind us of the ironic and often sad stories behind the what the Nazis called Entartete Kunst, or degenerate art.

The line between Nazi art and Entartete Kunst was never very clear, even to the upper echelons of the Nazi government. For a long time Joseph Goebbels was interested in Expressionism–he had an eye for pain–and almost succeeded in making it the house style of Nazi Germany, which would have been extremely peculiar. After Hitler reclassified Expressionism as degenerate, one of Goebbels' favorite painters, Emil Nolde could neither paint nor join the Nazi party, itself an Expressionist situation.

Meanwhile, Adolf Ziegler's triptych The Four Elements was displayed prominently as a model for German art. After the exhibition Hitler hung the paintings over his fireplace and gazed at them until he grew bored, at which point he took them down and had the artist sent to Dachau. There his physical presence must have had the same effect as his paintings: a few moments of fascination while you take him in, followed by utter indifference. Ziegler survived Dachau and later disappeared into obscurity. 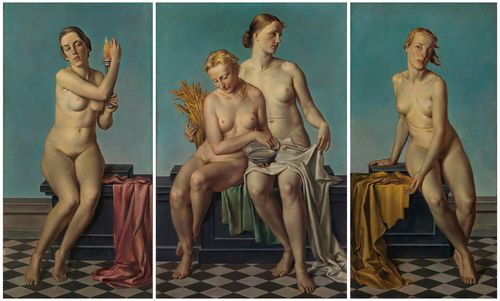 The Four Elements is a genuinely dreadful painting. The four figures are festooned with symbols of something–the exact representational program of German fascism had yet to be worked out. They also sport pubic hair, which must have been the specifically Aryan touch. Compare Ziegler's painting to Ernst Kirchner's A Group of Artists (The Painters of the Brücke). Kirchner has crammed his four figures into an utterly unheroic space. Each artist has his own mood. They look off-putting but hardly a threat to the social order. In fact, the painters of die Brücke, or the Bridge, had the seemingly respectable goal of bringing great German art up to date. 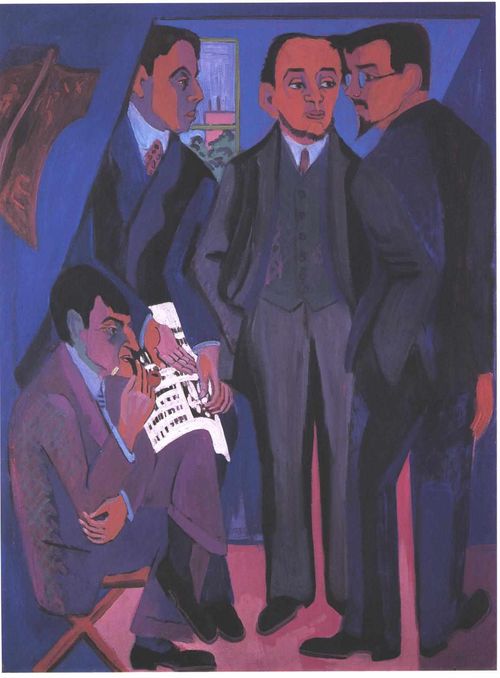 If you saw the Kirchner in its home institution Cologne, Germany, the painting would appear as a ruminative example of mid-Twenties German Modernism. In the Neue Gallerie's exhibition A Group of Artists takes on a dangerous aura because we're asked to look at it through the eyes of its historical audience. When they gazed upon the artworks in the Entartete Kunst exhibition, what did they see, looking from the cusp of totalitarianism? The experience must have been a kind of double displacement: Kirchner and his fellow degenerate artists represented a rejection of past values, as well as a rejection of the values to come.