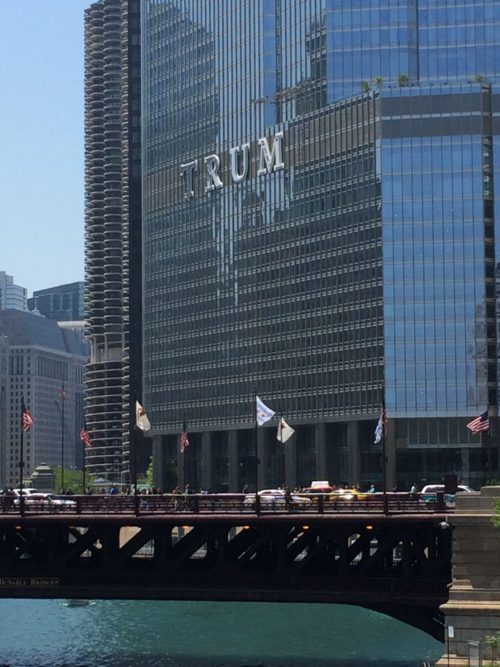 [O]n The Wall Street Journal's website Tuesday, Trump lambasted the lead architect of his tower, Chicago's Adrian Smith, for calling the sign tasteless and claimed he had done more to design the building than Smith. And Trump repeated his argument that the sign will become as beloved as the LA's Hollywood sign.

"It happens to be great for Chicago, because I have the hottest brand in the world," Trump told the Journal.

Mayor Rahm Emanuel says the giant sign just installed on the Trump Tower is "architecturally tasteless."  The sign, which was still missing its P when I took this photo on Monday (it's on now), is even more awful in person than it is in photographs. Graphic designers will note that whoever is in charge of hanging the sign didn't compensate for the spacing problems of "R," so there's a gap between the "R" and the "U."

Emanuel will have to get creative if he wants the sign taken down. It's already been approved by the city zoning administrator and the local alderman (you can't change a lightbulb in Chicago without a local alderman's approval). According to Kamin's article, one possible solution is that the city will let Trump keep it up until the costs amortize, then make him take it down.