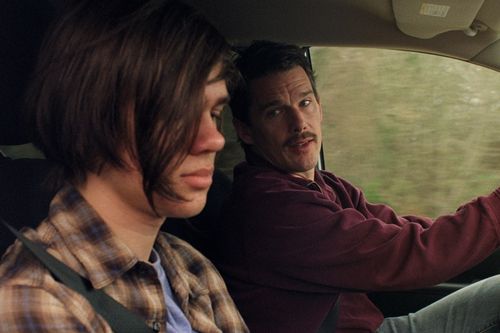 I saw Richard Linklater’s Boyhood over the weekend. It’s the best film I’ve seen in a long time. I won’t fill you in on the film’s remarkable backstory. I’ll just try to convince you to see it while it’s still in the theaters.

With a 2:45 running time, you would expect Boyhood to drag on, but it glides by with sly elisions. When the film opens Mason (Ellar Coltrane) is cherubic and watchful.  Then you notice his haircut has changed since the last scene; a year has passed. In the early scene Mason’s older sister Samantha (Lorelei Linklater) gives voice to youthful discontent. Then Mason appears with his bangs out of control and you know we’re in middle school and Mason is not happy.  Then, rather abruptly in his freshman year in high school, Mason starts speaking. Coltrane delivers his lines in two modes: a cool murmur and an adolescent rant. Neither mode addresses his immediate circumstances very directly. He struggles with issues of control and freedom, like any sensitive and aware kid his age. His paranoiad rants, though, sound downloaded from the Internet, which he claims to hate so much.

Coltrane’s most engaging scene in his early boyhood is his glowing expression as Mason lines up to buy the next installment of the Harry Potter saga. He’s dressed as Harry and his best friend is a dead ringer for Ron, which makes me wonder if Linklater hand’t been toying at one point at drawing a parallel between his project and the Harry Potter books. Mason’s is a bit of a wizard himself, the solitary product of two non-conformist parents with unresolved relationships with their own childhoods.

There are a lot of points at which Mason could have gone wrong. For example, there’s a scene involving underaged drinking and circular saw blades that looks like trouble from the opening frame. The bullying older boys have already settled uneasily into familiar patterns of male behavior reluctant. They’re not bad kids. They’re just timid and unimaginative.  This scene is a model of what would happen if Mason gave up rather than went down the wrong path. His father is the wrong path, as Dad (Ethan Hawke) is at pains to remind him. In fact, there’s no real major personal crisis for Mason other than the breakup with his first girlfriend. She’s so pretty you know she’s going to break his heart.

Mason’s father consoles him with advice that is both sound (“These high school romances never work out”) and dubious (“Women are always trying to trade up”).  Ethan Hawke brings his loquacious energy of Before Sunrise films to this one. His character has a lot to explain, especially when Samantha is in middle school. In the middle of an Astros game, when he’s thoroughly enjoying himself, she bluntly asks him, “Do you have a job?” He pauses for three or four seconds, a long time for a Hawke character, and provides an answer near enough to the truth to make us still like him.

Patricia Arquette, on the other hand, impresses without acting particularly well. She plays a single mom with poor taste in men, still falling for guys she meets in school. Anger is her character’s dominant emotion—and one that wouldn’t tax many actors. When Hawke’s character congratulates her on how well she’s raised her kids, Linklater cuts in for an extreme closeup to capture Arquette’s reaction and she doesn’t deliver. You can see her character has put herself back together, but you would expect to see more than one emotion register in her face. Arquette might be the film’s best chance for an Oscar nomination, but the part is bigger than she is. She doesn’t work her way fully into the role. Then again, Coltrane isn’t a charismatic actor. He’s like a chess piece placed strategically in the whirling scenes around him. You don’t want a Meryl Streep chewing up every scene.  Linklater is playing a high-risk game here: he doesn’t know how the characters will be played with each passing year, so emphasis is tricky.

Without giving too much away, the ending of Boyhood is gratifying. Not only has Mason turned out well, so has Coltrane. He deserves all the praise that’s come his way. I wonder, though, how much he’s been shaped by working with Linklater all these years. Coltrane is a taciturn version of Ethan Hawke: self conscious about his own coolness, but kind of a one-note actor. Linklater likes to deploy Hawke in quiet places so we can hear everything his character has to say. Linklater inverts this strategy with Coltrane, embedding him with a lot of loud adults so that we have to listen very carefully to hear the quiet rustlings inside.