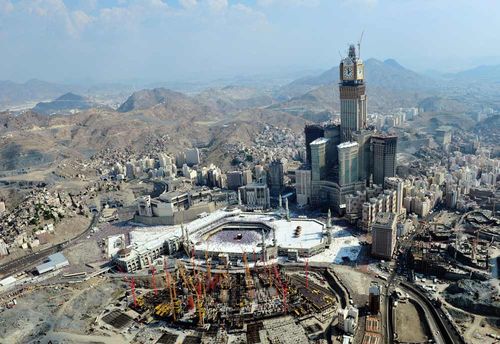 Good taste has been banished from Mecca (see the hideous kitsch of the Makkah Royal Clock Tower above). So has religious tolerance and diversity.

Unlike Baghdad, Damascus and Cairo, Mecca was never a great intellectual and cultural center of Islam. But it was always a pluralistic city where debate among different Muslim sects and schools of thought was not unusual. Now it has been reduced to a monolithic religious entity where only one, ahistoric, literal interpretation of Islam is permitted, and where all other sects, outside of the Salafist brand of Saudi Islam, are regarded as false. Indeed, zealots frequently threaten pilgrims of different sects. Last year, a group of Shiite pilgrims from Michigan were attacked with knives by extremists, and in August, a coalition of American Muslim groups wrote to the State Department asking for protection during this year’s hajj.

Ziauddin Sardar reports the hajj has become "a mundane exercise in rituals and shopping."