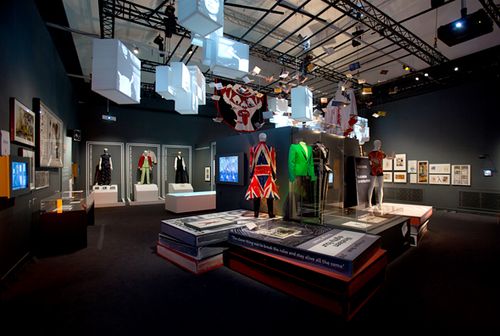 Last Friday night I visited the David Bowie Is exhibition at the Chicago Museum of Contemporary Art. The first question to answer is whether or not David Bowie is worthy of an exhibit at a major art museum. The answer is yes. Bowie gets the full artist treatment in David Bowie Is: paintings, costumes, manuscripts, posters, album covers, video installations—even a coke spoon. The exhibit makes a convincing case that David Bowie is an artist.

Bowie’s life has three stages: the real, the symbolic, and the imaginary. His roots were in drizzly post-war England, a landscape of darkened streets and derivative pop culture that would drive any sensitive and intelligent person a little batty. This was the reality from which he struggled to escape. Even his real name, Davy Jones, held him back. His breakout hit was “Space Oddity,” released in the same week as the Apollo 11 moon walk. The song was built on folk strumming and abruptly shifting points of view; the disintegration of self was already underway. In subsequent albums he appropriated a dazzling variety of symbols, many of them derived from literature, to build personas that unified his recorded music and his stage shows, while distinguishing himself in a market full of high-concept rock acts. J.G. Ballard inspired the decadent visions of doom that shaped his early persona Ziggy Stardust. He borrowed William Burroughs’ cut-up technique to compose lyrics. Later in his career he incorporated ideas from Japanese fashion designers and German cabaret theater—exotic stuff if you expect your rock star to venture no further than some close listenings to Howlin’ Wolf.

During his symbolic phase he used his mannikin-like body as his primary means of expression. It’s appropriate that the MCA exhibit centers around the costumes he wore on stage. Through the galleries mannikins in Bowie wear stand over the the jumble of bric-a-brac—keys to his Berlin apartment and so on—that makes up a rock musician’s life. The costumes are beautiful, looking more like sketches for clothes rather than something someone would wear. Cleaned up for the exhibit, the outfits show no signs of wear and tear, rather like Bowie himself. There were times, however, when the costumes overwhelmed the music. One such occasion was Bowie’s 1979 Saturday Night Live appearance, which occurred during his Berlin cabaret phase. He wore an Expressionist suit, but instead of pants it had a kind of conical skirt so constraining Bowie couldn’t walk. He had to be carried to the microphone by two backup singers. The usual Bowie effect is that he feels perfectly at ease in our unease. In this performance, in this absurd suit, we feel his unease as he awkwardly moves his hands around in a vain effort to find the song’s rhythm.

My companions in the exhibit tour had very similar experiences in the SNL performance and Diamond Dog gallery in the MCA exhibit. More than one person told me at this point, “He was one weird guy.” No one elaborated, but I knew what they meant. The David Bowie of the 1970s was all persona and no person. No one glimpsed from behind the masks to check if we were having fun, or let us know he was having a good time. Even his 1972 declaration that he was gay was unconvincing, and still is. 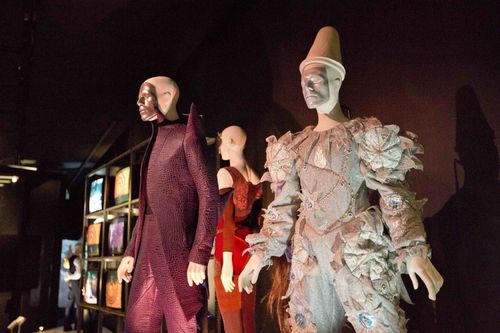 The great “Ashes to Ashes” video from 1980 emerges as a key text in his career. Bowie performs in an elegant jester suit (above, foreground). The images are gently surreal, the music catchy and self-referential. Bowie appears relaxed, demonstrating his New Romantic sweetness—quite a change from the free-floating hostility of Diamond Dogs or the drony histrionics of Heroes. Step a few feet to the left and the transformation is complete. The “Let’s Dance” video (1983) features a conventionally-clad Bowie looking out onto a world of very real hardship. For the first time, Bowie acknowledges that he might be part of the problem rather than its deviant solution. An Aborigine girl gets to don the transformative red shoes. A decade before, Bowie would have snatched them for himself.

By this point he’s reached his imaginary phase. He doesn’t appear more authentic, more himself, so much as less mediated. A contiguity begins to form between his inner self, whatever that might be, and his outer self, about which we know too much.  At last he doesn’t have to invent a genre for himself. Once electronic dance music develops in the 1990s all he has to do is record a few hits and show off a few dance moves. Alas, a David Bowie without the drama of his own self-invention is a less interesting person and performer, and David Bowie Is loses interest in its subject once he settles into his final persona, Thin White Uncle David.

David Bowie Is is structured around its subject’s development from cramped 1950’s Brixton to the wide-open and genial spaces of the rock imaginary. The lasting impression isn’t how weird Bowie was but how much great music he created. Remarkably, over a long career of radical changes, he made only one real misstep, a mid-1990s dalliance with sado-masochistic surrealism on the Outsider album and tour. In the end one is left wondering if Bowie’s journey is all that deviant. His career is a highly inventive version of the changes a lot of us go through. He went from a confining youth to the experimental self-invention of early adulthood before finally finding one’s middle-aged comfort zone of easy dance music and loose-fitting clothes. To be sure, Bowie skipped over the period of middle-aged spread hidden by a Green Bay Packers sweatshirt. Then again, most of us wouldn’t appear in public wearing a kind of onesie festooned with calligraphic Japanese rabbits, what the older Bowie dismissed as “that absurd bunny costume.”

If you go: the Chicago Museum of Contemporary Art is the only American stop for the David Bowie Is exhibition. It runs here through January 4, 2015. Tickets are $25 for adults for a timed admission. Included is a set of headphones you wear throughout the exhibit. The experience is immersive if occasionally disorienting. Be patient and allow yourself 90-120 minutes to go through the whole thing. Yes, it takes that long. We had to be shooed away after 90 minutes because the museum was closing. The galleries devoted to his early years have a lot of small objects and the explanatory cards are close together, leading to some logjams. Initially I got stuck behind a near-sighted couple who read slowly. Later galleries open up and allow for more leisurely perusal. Finally, make sure you have access to a lot of David Bowie songs, because you’re going to want to listen to them afterward.

Note: the photos in this post were mostly taken professional photographers at the Victoria and Albert Museum, where the exhibition originated. Photographs were not allowed in the MCA exhibit. The Chicago exhibit has all the same elements as London, just adapted to the MCA space.