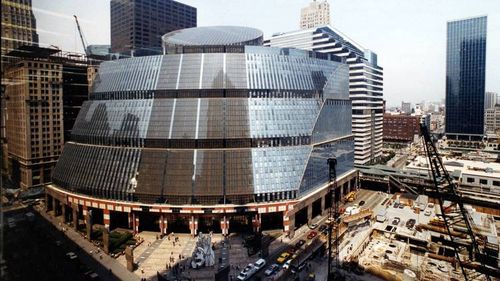 Just as Post-Modernist buildings are starting to appear on preservationists' lists, here's another 1980s building in desparate need of attention.

Back in August Blair Kamin reported on the sorry state of the James R. Thompson Center, the Helmut Jahn-designed administrative building for the state of Illinois. The Post-Modernist Thompson Center reflects—literally when someone bothers to clean the windows, which isn’t often these days—two other important public buildings in downtown Chicago: the Classical Revival-style City Hall/Cook County building and the Modernist Daley Center. The place is a dump. It hasn’t been decently maintained in years.

The building is now governor-elect Bruce Rauner’s building—and problem. Outgoing governor Pat Quinn, a Democrat, acknowledged the Thompson Center was falling apart but claimed he had to fix the state’s crumbling infrastructure first. Quinn raised the state’s income tax, so he couldn’t risk being pilloried by Republicans for spending money on frivolities like the Thompson Center. Rauner, though, is a Republican. Like Nixon in China, Rauner doesn’t have to worry about someone from his right crying foul if he hires some window washers. 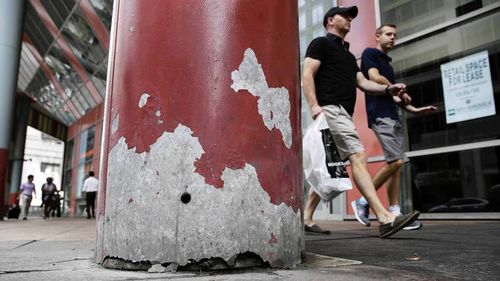 As Kamin and others have pointed out, the decrepitude of the Thompson Center reflects poorly on Illinois. We have terrible politicians and lots of money troubles. We don’t need a rundown state building in the Loop to remind us of how bad things are in Springfield. Granted, even at its best the Thompson Center is a flawed building. The salmon and green color scheme seemed odd even in the 1980s. The huge atrium is dramatic but it’s stuffy and noisy. It’s something of a miracle it was ever built in the first place—by a Republican governor, no less. Jahn has since admitted he made a lot of mistakes in its design—he was only 39 when he drew up the plans in 1979. The Thompson Center should be cleaned up because it’s a civic structure and we need a government that can attend to our symbolic needs, not just our functional ones. The symbolism of the Thompson Center has been obscured over years of dirt and grime. Jahn re-interpreted Modernism's glass sheathing as a symbol of governmental transparency.