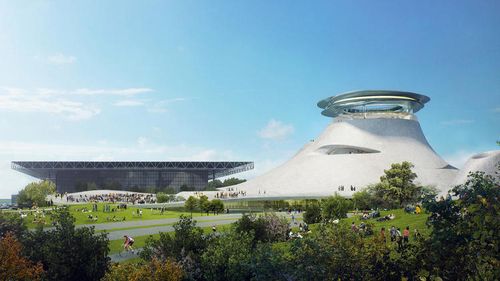 The proposed Lucas Museum of Narrative Art has caused a huge controversy in Chicago. Objections to it vary, but right now there are no local advocates for building the museum as designed by Ma Yansong.

My objections centered around the whole idea of a Star Wars museum. I question the films’ enduring impact on American culture. Arguably Independence Day (1996) was the last film to be directly indebted to any of the Star Wars films. Lucas’s political view never really evolved much past the late Cold War era ethos of ascendant liberal values and murky Eastern mysticism. His primary source material for the Star Wars films, science fiction serials of the 1930s, no longer resonates.

Lucas assures us that the Lucas Museum won’t be devoted exclusively to Star Wars. Yoda will be there, to be sure, but so will Indiana Jones and The Lord of the Rings—along with some Norman Rockwell paintings and “digital art,” whatever that might be. The actual content of the museum has yet to be determined, but Lucas’s remarks have indicated the museum will showcase narrative of a regressive and narrow kind. I fear that the only kind of narrative art exhibited in the Lucas Museum will be those forms that validate Lucas’s storytelling strategies in the Star Wars films. If the purpose of a museum is the care, preservation, and display of a shared heritage, then I don’t think the Lucas Museum meets that requirement. As currently conceived, it will showcase the obsessions of a small coterie of aging nerds.

The site of the museum is just south of Soldier Field in Grant Park. The site is occupied by two parking lots, but it’s on a critical stretch of public land maintained by the Chicago Park District.  The Chicago Tribune editorial board would rather have the parking lots than the Lucas Museum. The proposal was announced without any input from the public and the board doesn’t trust the Chicago Plan Commission to make an intelligent decision. After all, the CPC signed off on the Soldier Field renovation. While George Lucas will pay for the construction of the museum itself, taxpayers will be stuck with the bill if the museum fails to meet expectations—a likely prospect, I think.

The first proposed design for the museum was revealed last week. Lucas personally selected Ma, a 39-year-old architect with some very good work in his portfolio. Interestingly, he’s the same age as Helmut Jahn was when he designed the Thompson Center, now regarded as an immature work. The Tribune’s architecture critic Blair Kamin tries to be fair to Ma while objecting strongly to the design on contextual grounds.  Ma drew up a massive blob structure to house Lucas’s outsized ambitions for the museum. The Chicago museum is four times the size of the museum Lucas wanted to build in San Francisco before that city told him to take a hike. Kamin describes Ma’s Chicago proposal “jarringly off-key” and a "fumbled essay in 'blob architecture.'" If built as designed the Lucas Museum would be  a Jabba the Hutt squatting amongst much more refined museums like the Field Museum and the Shedd Aquarium. “In its present state, it resembles a movie stage set — an abstract outline without convincing details, a representation of a city rather than the real thing,” Kamin writes, adding, “the burden is on [George Lucas] to demonstrate that he's enhancing the lakefront, not just luring tourists.”

I agree with both of these objections, but mostly the first one. The real estate along South Lake Shore Drive in the city’s showcase park is too valuable to squander on a vanity project. Ma’s design isn’t awful, and I can see what he's trying to get at; he's just not there. The litte space ship on top of the building suggests he will never be allowed to get there. His residential tower in Mississauga, Ontario was striking because of its bland suburban setting. The Lucas Museum, though, is the wrong building in the wrong place.