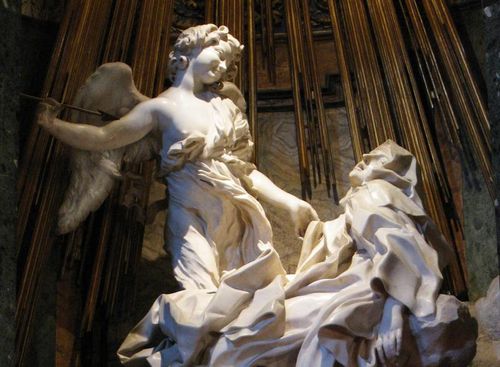 We live in Cervantes's world, says Julia Kristeva, a world of fanatics "drunk on images" of the virtual Absolute. It would seem that the only way to live in this world is to laugh at faith and love, as Cervantes does.

[D]are I suggest those dangerous maniacs of the virtual Absolute might not really be so scary? Cervantes’s laughter will get the better of them. Their fundamentalist rage would be defused if they just read him instead of burning flags, embassies, and Danish cartoons. And he could detoxify the rest. I know, there’s a long way to go — fanatics are no good at reading, or laughing.

From Teresa, My Love: An Imagined Life of the Saint of Avila, via spoliamag.tumblr.com

Kristeva, however, looks to the 16th-century Spanish mystic St. Teresa of Avila (and the subject of a notorious Bernini sculpture, above) as a cure to the nihilism inside all those who suffer from the disease of frustrated idealism.  Teresa, Kristeva writes, is important because she heals the split between belief and love and "ventures as far as possible along the route that beckons the person who doesn’t give up on believing, the person who talks as a way of sharing, and who loves in order to act" and describes the journey with "disturbing, seductive subtlety."