Michael Kimmelman’s musings seem to have something to do with libraries, but surely urban planning can somehow help alleviate the distrust between the legal system and its communities.

And the other hurdle: overcoming public skepticism about the entire planning process to make clear the potential for better communities.

And of course harnessing private capital for these new libraries, housing and other comm benefits in ways that benefit private market.

Sal Robinson reading the description of a newly rediscovered Raymond Chandler libretto, written long before his detective novels: “It sounds, in other words, totally silly.” In other words, be careful about the hype that sometimes accompanies the re-appearance of lost literary works. Many of them were missing for good reasons.

The indie music middle class, like the middle class at large, is falling further behind economically, but that doesn’t prevent those above and below it on the economic hierarchy for inflicting guilt upon it. 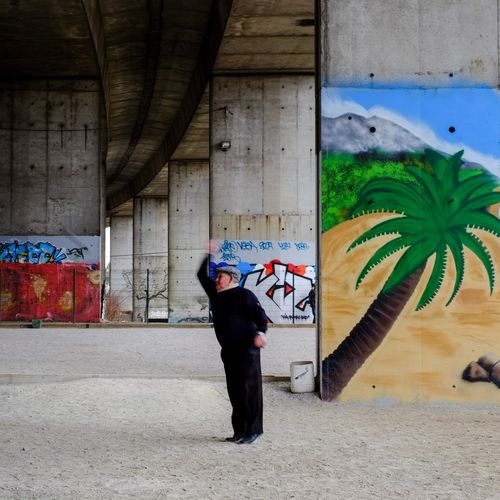 A man plays pétanques underneath the A3 highway, Noisy-le-Sec, in Seine-saint-Denis, an impoverished suburb of Paris. The photograph was taken by Raphaël Fournier, whose series “Grand Paris” complements Paul-Hervé Lavessière’s book La Révolution de Paris about the disconnect between Paris and its suburbs.

Right now some TV executive is thinking it's his duty to make a cop show that solves the race problem, and I'm not looking forward to that.

Across the City and the Nation, a Bitter Chorus: I Can’t Breathe

There are dozens, hundreds, thousands of opposition organizations and movements trying to save animals, clean up the environment, help workers, protect children, support women, remove poisons from food—but no significant opposition to the system as a whole and its way of life.

-Ronald Aronson after re-reading the old chestnut of the American New Left, Herbert Marcuse’s One-Dimensional Man (1964). The good news: Since 1964 American society has become more inclusive and tolerant, although clearly more work needs to be done.

If you’re a pilot bombing Dresden, you’re part of the greatest generation. But if you were an MP [military police] doing a good job in Iraq, looking after your troops, behaving lawfully in a complicated environment, your feelings about what you did still get tied up with this much broader thing that’s out of your control.

-Phil Klay, author of Redeployment, one of the best works of American fiction published this year. I read it earlier this year.

At 13 I stole a car with my friends & drove it 2wks before we got busted. Only one charged was black. #CrimingWhileWhite