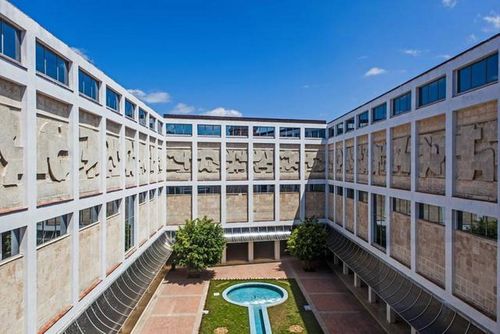 Now that the U.S. is restoring full diplomatic relations with Cuba, Cubans can finally get parts for all those 1950s Impalas stranded on the island. Possibly, anyway. But what about Cuba's mid-century Modernist buildings?

Cuba experienced an economic sugar high after World War II, attracting moneyed people, i.e. Americans, who didn’t like the island’s standard Neocolonial and Beaux Arts styles. The new sugar rich commissioned Cuban architects steeped in International Style architecture to build Modernist houses designed to be open to the Cuban landscape and climate. After the revolution, the state confiscated many of the homes and converted them into schools, government offices, and homes for government officials. The rest were subdivided into multi-family units and/or looted for their materials.

There’s interest in Cuba in restoring the Modernist structures, but there are significant hurdles. The Cuban government has underwritten restoration projects of colonial-era buildings in Old Havana because of the potential for hard currency. The Modernist buildings, however, are closely associated with the people the Cuban revolution kicked off the island. According to a story in Gary Marx’s 2005 article, Che Guevara informed the owner of one of the Modernist homes, "The mission of this revolution is to get rid of people like you."

While the restoration of diplomatic relations can’t hurt the cause of Cuban mid-century Modernism, it’s not yet clear how much it will help. The president can open an embassy, but the embargo on Cuba is codified in legislation. Only Congress can lift the embargo, and in a couple of weeks Congress will be controlled by Republicans who hate Barack Obama more than Fidel Castro.