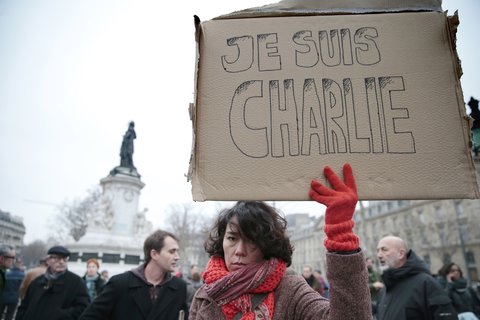 Perhaps it's no coincidence that the January 7 issue of Charlie Hebdo featured a satire based on Michel Houellebecq's new novel, Submission, about a Muslim president of France.

Interestingly, Charlie Hebdo was born through an act of censorship. The journal was founded in 1970 by journalists who worked for Hari-Kiri, a journal that was banned because of its satirical coverage of the death of Charles de Gaulle. The name Charlie Hebdo is a reference to Charlie Brown in Peanuts. In French the title means Charlie Weekly.

Mashable details what's known about the victims so far.

The Washington Post rounds up cartoonists' reactions to the shootings in Paris.

In the ongoing coverage, some news outlets are obscuring the offending cartoons, in case some terrorists are waiting in the parking lot with loaded AK-47s.

The right to blaspheme religion is one of the most elemental exercises of political liberalism. One cannot defend the right without defending the practice.

–Jonathan Chait on those who blame the Charlie Hebdo cartoonists for provoking Muslim extremists.

It should be pointed out that the gunmen not only killed cartoonists and their editors, but also two policemen, shooting one point blank in the head as he lay on the sidewalk. There are reports that the video of the policeman's killing has been repackaged as propaganda by supporters of the Islamic State militants. The policeman shot on the street was Ahmed Merabet.

. 2/ Video with the #ISIS Nasheed & poster below with the new hashtag now running in Arabic #WeAvengedTheMessegner pic.twitter.com/HebRrqnnPM