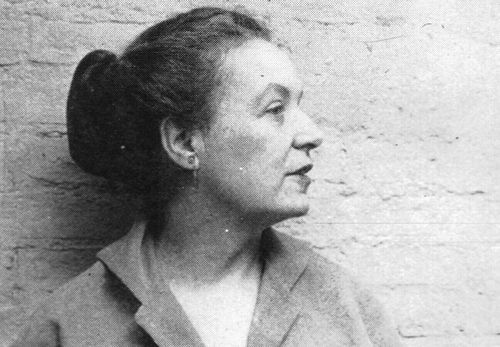 Sibyl Moholy-Nagy was the wife of architect László Moholy-Nagy and a sharp-tongued architecture critic. At the time of her death in 1971 she was one of the best known of a group of female critics (Jane Jacobs was a contemporary) who took on the architectural establishment of the time, dominated by the formidable International Style architects, or Johnnies, as Moholy-Nagy called them.

In the second line of her Art in America review, [Moholy-Nagy] writes: “In the best of Satanic traditions some of this fruit was poisoned, although it looked at first sight as pure and wholesome as a newborn concept.” She identified the poison as formulaic functionalism: modern architecture stripped of its early spiritual and idealistic aims and transformed into the dehumanized servant of technology and big business. The “Johnnies” who spread this toxic “appleseed” were her husband’s former Bauhaus colleagues — Walter Gropius, Ludwig Mies van der Rohe, and Marcel Breuer — aided by “converts,” such as Philip Johnson. In her view, they had killed off the evolution of the indigenous skyscraper, which had given the nation’s cities “a uniquely American profile.”

I don't know if she originated the idea of an indigenous American skyscraper, but in any case she was present at the moment when the skyscraper form evolved from something American to something global.