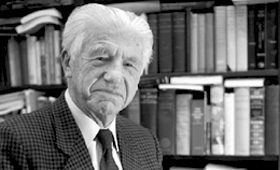 M. H. Abrams's best-known work of criticism was Mirror and the Lamp (1953), which elevated Romantic poetry into a topic of serious study in American English departments. Abrams argued that the English Romantics introduced an entirely new metaphor into literatue. Eighteenth-century Neo-Classicism regarded that art as a mirror held up to nature. The Romantics, on the other hand, believed art could be a lamp illuminating inner qualities of nature not accessible to the objective eye.

Beyond stating a claim about Romantic thought, Abrams introduced to literary studies the idea that metaphors shape how we perceive the world, as he explained in this 1990 interview.

I think one of the reasons why it’s been of interest to a broad spectrum of readers is because one of its emphases was on the role of metaphor in steering human thinking. It was a very early book to insist on the role of metaphors in cognition, as well as in imaginative literature — to claim that key metaphors help determine what and how we perceive and how we think about perceptions.

Art as an illuminating lamp wasn't just a feature of English Romanticism. Abrams linked aesthetic theory and the study of perception. Metaphors not only lend meaning to perceptions; they also provide a frame through which we perceive the world.