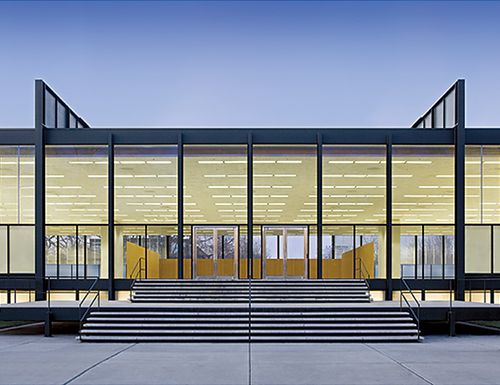 Crown Hall represents a battle. It stands where an apartment building called the Mecca once anchored Bronzeville, the heart of black Chicago and prime destination of the Great Migration north. Louis Armstrong first improvised on his horn in Bronzeville; its sharp, ambitious men and women, like Jesse Binga, John Johnson, and Ida B. Wells, established Chicago as the nation’s center of black business and journalism. The teeming Mecca, with its soaring atriums and intricate ironwork, was central to the scene. “To touch every note in the life of this block-long block-wide building,” wrote the poet Gwendolyn Brooks, “would be to capsulize the gist of black humanity in general.”

Ludwig Mies van der Rohe’s Crown Hall on Chicago’s Side Side, “a serene temple of the present” (Eero Saarinen at the building’s dedication in April 1956), was built in the middle of an African-American neighborhood. Thomas Dyja argues that the building, while consistent with mid-century urban renewal efforts, is inconsistent with Chicago’s tradition of populist art forms.