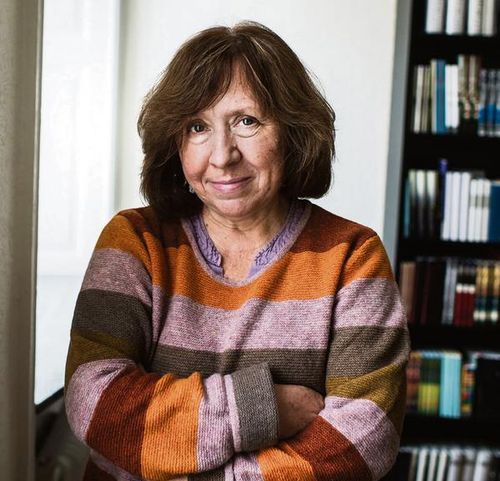 For the second year in a row, the Swedish Academy uncovered a seemingly minor writer almost completely unknown in the English-reading world.

Who is Svetlana Alexievich? She's a reporter, a writer of non-fiction, the first non-fiction writer to win the Literature prize since Winston Churchill in 1953. In this sense, her award is not only a surprise, but a breakthrough.

Her first work published in English was "Boys in Zinc," which appeared in Granta in 1990. The title refers to the zinc coffins in which the bodies of slain Soviet soldiers were shipped back from Afghanistan. In 2005 her book Zinky Boys: Soviet Voices from the Afghanistan War

appeared in English translation. The book was based on interviews she conducted with the mothers of dead soldiers.

For the next three years I spoke to many people at home and in Afghanistan. Every confession was like a portrait. They are not documents; they are images. I was trying to present a history of feelings, not the history of the war itself. What were people thinking? What made them happy? What were their fears? What stayed in their memory?

A while ago N+1 published an excerpt from Voices from Chernobyl: The Oral History of a Nuclear Disaster

Everything you need to know about Svetlana Alexievich, winner of the Nobel in literature http://t.co/mBO6pNI3rb pic.twitter.com/hFrwQ2yjO7