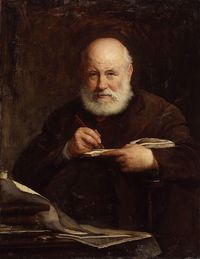 Once upon a time there was a Victorian gentleman who devoted his keenest attention to things right under his nose, especially when there was a plate of food in front of him.  He could be in the dining room of a mansion, or sitting in the drawing room of his mother's house, where he liked to spend time with "Faithful Jack," a man decades younger. One time he spent an afternoon in a rowboat with his boss's daughter, sitting a few millimeters too close to each other than was proper for the time. His work life took place in some large rooms indeed: the National Portrait Gallery in London, where Sir George Scharf was the founding director.
One hundred and twenty years after his death, Scharf's life, as rich in social incident as it was barren of self-reflection, has been documented by Robyn Warhol and Helena Michie in Love Among the Archives: Writing the Lives of George Scharf, Victorian Bachelor

. The book's main source material is Scharf's extensive diaries, in which he scrupulously avoids recording anything of interest to anyone. A representative entry: "Very lively talk, Extra waiter (Midland). All carving done off the table. The hired flowers & new table linen looked very nice. To bed after 1 o’clock." This guy makes Willian Byrd look like Virginia Woolf. Desperate to get inside a man they called  came to call "The Most Boring Man in the World," Warhol and Michie recreate a dinner party menu that Scharf may have consumed. They learn that Scharf had a nineteenth-century stomach capable of ingesting, in one sitting, servings of beef (in soup and roast forms), chicken, mutton, and fish, along with unknown quantities of chocolate profiteroles–without lapsing into a coma.
Eating saddle of mutton in the manner of a English bachelor is a means of "lowering the threshold of the subnarratable," a literary critical technique that's becoming  popular. The idea is that the pathway to the inner life of an historical figure lies in slapping cold water on your face every morning just as she did. In the end, though, Warhol and Michie fail to uncover any traces of an inner life in their subject, so they turn Scharf into a representative figure. This isn't a bad idea except that it suggests there was a whole class of Victorians that experienced neither lust nor sentiment. Scharf was so bland he was quite possibly insane. What kind of a person pays such close attention to napkins?
This isn't to say that Love Among the Archives isn't worth reading. The book is not just about being a Victorian. It's also about being a Victorianist. This sounds fusty, but the period offers a perfect balance of eccentricity and documentary evidence. In an age of Google searches, it's refreshing to see someone venture into an archive, or sip consommé in the name of scholarship.