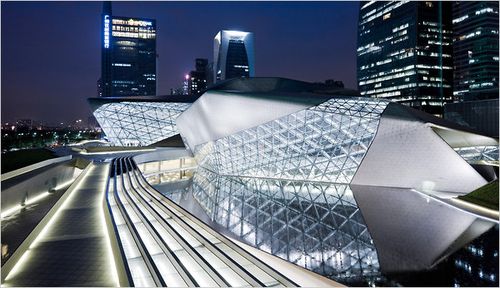 Say what you will about her buildings, but if you're a fan of architecture the death of Zaha Hadid has to be shocking and saddening. At sixty-five she was still in the peak of her career, although in some ways her moment had passed. Post-2008 architecture isn't about global brands, and Hadid cultivated her brand more effectively than most. The knock against her work was that her designs looked better as drawings than they did as buildings. In some cases this was true. The Heydar Aliyev Center Baku, Azerbaijan has great swooping lines but no good reason for being. The Guangzhou Opera House (above) is more typical of her work, at once thrilling and overdesigned. It's a bravura exercise in form-making, which was her specialty. She was a kind of Baroque Futurist. Neither aesthetic was quite of this world.