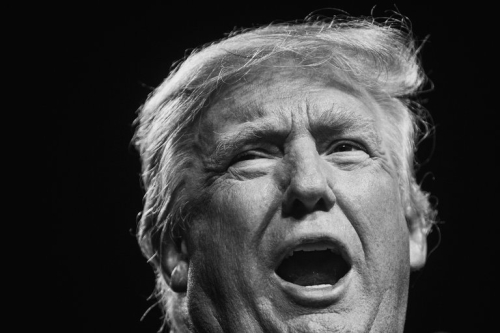 Trump’s verbal style has always been distinct. He doesn’t really speak in sentences or paragraphs. His speeches are punctuated by five- or six-word jabs that are sort of strung together by connections that can only be understood through chaos theory: “They want the wall … I dominated with the evangelicals … I won in a landslide … We can’t be the stupid people anymore.”

Brooks postulates that Trump's pathological narcissism is disintegrating his sense of self.

It’s hard to know exactly what is going on in that brain, but science lends a clue. Psychologists wonder if narcissists are defined by extremely high self-esteem or by extremely low self-esteem that they are trying to mask. The current consensus seems to be that they are marked by unstable self-esteem. Their self-confidence can be both high and fragile, so they perceive ego threat all around.

Maybe as Trump has gotten more successful his estimation of what sort of adoration he deserves has increased while the outside criticism has gotten more pronounced. This combination is bound to leave his ego threat sensors permanently inflamed. So even if Candidate Trump is told to make a normal political point, Inner Boy Trump will hijack the microphone for another bout of resentful boasting.

Is Brooks right–will Trump become even more locked into an estranged self as election day approaches? Will his supporters even notice that "let Trump be Trump" means that Trump himself will atomize into an array of resentments?