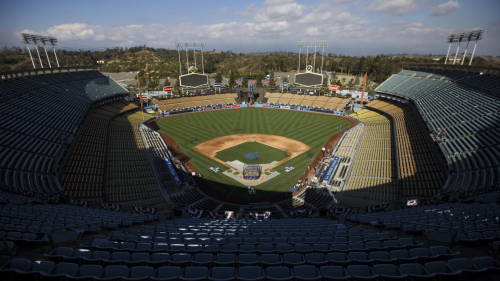 The grandstand’s massive concrete superstructure contrasts sharply with outfield seating areas that exhibit a breezy nonchalance, courtesy of their hexagon-shaped scoreboards and wavy corrugated metal roofs. Views of nearby Elysian Park and the distant San Gabriel Mountains (provided they’re not obscured by smog) give the stadium an Edenic feel.

The mid-century modern touch is also evident in the pastel palette of the grandstand seats, which shift from yellow to tangerine to aqua to blue as seating tiers rise above the field. The idea, Smith said, was to evoke a sunset.

A few weeks ago I took in a game at the newly renovated Wrigley. My eye was drawn more to the dual Jumbotrons than the 1937 scoreboard, which I checked mainly for the pitch could because the Jumbotrons couldn’t be bothered to track anything so mundane. I noticed the undersides of the suites still had the netting to prevent crud from falling on the fans below. Apparently there wasn’t room in the $575 million to fix that. And the concession area under the grandstands is still cramped and dark. I hear the Cubs’ locker room is nicer, though. The food options are marginally better and the beer gardens outside the stadium are better organized. In short, the Cubs have updated Wrigley Field with a competitive team and improved spaces for consumption.