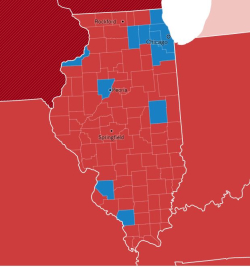 We've all seen the 2016 election results maps: isolated spots of blue surrounded by vast fields of red. If the blue spots look even smaller this year, it's because they are. Look at Illinois, for example. My home state went 55% for Hillary Clinton, yet her support is clustered in the Chicago metropolitan area, Peoria, the suburbs of St. Louis, the Quad Cities, and the college towns of Champaign-Urbana and Carbondale. The closer to a city center or a college classroom, the more likely voters will choose Democrats. Most of the state, though, is thoroughly red. Not coincidentally, most of the state is countryside. Yet these people voted for Donald Trump, a billionaire Manhattanite. How did that happen?

One way to read the electoral map is through the history of the ancient clash between city and country. In The Country and the City Raymond Williams traces its origins to the earliest moments of the modern age, 16th-century England. At that time mercantile interests started working with rural landlords to fence off the open farmland and convert it to pastureland for sheep, initiating a process of rural depopulation that culminated in the industrial revolution of the 19th century. Thousands of farmers lost their way of life, but a new literary form, the pastoral idyll, was born. For Williams, the idyll obscured the social and economic changes threatening the yeoman farmers' way of life.

Defense of a “vanishing countryside”—“the open air,” “the life of the fields”—can become deeply confused with that defense of the old rural order which is in any case being expressed by the landlords, the rentiers, and their literary sympathizers. A physical hatred of the noise and rush of the city can be converted . . . to a powerful but acrid vision of the metropolis reclaimed by the swamp and the reappearance of a woodland feudal society.

The conflict between the country and the city changed considerably over the next three centuries, with literary genres appearing to track the changes. The Romantic "counter-pastoral" of Goldsmith, Wordsworth, and Coleridge recognized the loneliness and isolation of country life. Urban life was the domain of the novel. Loneliness was a prominent theme here, too, in the work  of Dickens, Hardy, Wells and Joyce, but it was a loneliness within diversity and competition rather than rural decay.

From the city the countryside was sometimes a changeless Eden, sometimes a realm of ignorance and despair.  For farmers the city also had a dual face. It was the place in which men could find new brides–or fall into traps laid by prostitutes. Merchants bought their livestock and crops, and sometimes cheated them. Bankers loaned them money and lawyers took away their farms. The city was alluring and mysterious realm where an honest, ordinary man (or, occasionally, a woman) almost inevitably came to ruin.

People in the urban blue patches in the Illinois map want gun control and Obamacare. Voters in the college town blue patches care about climate change and genderless bathrooms. For them, intractable bigotries and inexplicable fears of terrorist attacks lurk behind shuttered main streets and isolated farmhouses. What urbanite doesn't get a little uneasy stopping for gas in a small country town? Conversely, gun control makes little sense in the fields and woods of the red lands. A good country doctor is vastly preferable to the bureaucracy of Obamacare. Climate change is an abstract threat to people who live on far-away coasts.

The red counties voted for a man from the biggest city in the country because he knows how it's rigged against decent, ordinary people, and always has been.