Late in his career John Berger retreated in the foggy mists of the French countryside, reappearing every so often with a novel or an essay. But in the 1970s Berger was perhaps the most famous art critic in the world. He brought Walter Benjamin into popular culture at a time when few people outside the Frankfort School tradition paid much attention to the German critic and philosopher. Ways of Seeing, Berger's most famous work, was an update of Benjamin's Artwork Essay. In the book and the accompanying television series Berger showed how advertising appropriated the aura of great works of art to sell products. Like Benjamin, Berger applied Marxist concepts to art criticism. Oil painting, Berger once wrote, "did to appearances what capital did to social relations. It reduced everything to the equality of objects. Everything became exchangeable because everything became a commodity."

Landscape painting was a particular area of interest for Berger. He didn't hate it all, but he was deeply skeptical of a lot of it.  The painting below by Thomas Gainsborough, Mr and Mrs Andrews (circa 1748) was, in Berger's eyes, was an image of socio-economic power. 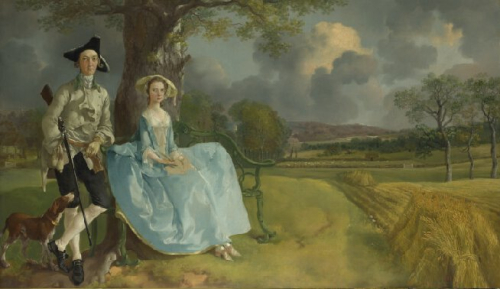 Completed shortly after Mr. Andrews' marriage to the daughter of a neighboring gentry–a marriage that enhanced his estate–the image captures the unchanging power of property relations in pre-industrial England. "They are not a couple in Nature as Rousseau imagined nature," Berger comments. "They are landowners and their proprietary attitude to what surrounds them is visible in their stance and their expressions." There's even a blank space in Mrs. Andrews' lap for an as-yet unborn heir (or so the speculation goes) to help perpetuate control over the land.

Jonathan Jones compares the Gainsborough landscape to a contemporary image, speculating how Berger might have interpreted an image of a polar bear standing on an iceberg in 2014. 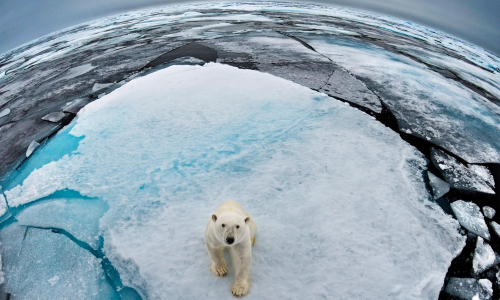 Jones recognizes something of Mr. Andrews' proprietary gaze in the polar bear, but unlike the 1748 image of permanent ownership over an unchanging landscape, the polar bear's world is literally falling apart. His realm gets smaller every day. What had once been eternal has become an object of historical change. Jones writes, "Berger taught us to see the landowner’s whip behind every painted haystack, and his critical attitude to images of landscape is the more telling today when human action is destroying nature even as we lovingly photograph and film it."

There's one more point of comparison between the images. Still early in his career when he painted the Andrews landscape, Gainsborough was still developing naturalistic effect into his oil paintings. Note, for example, the tumultuous weather in the background. Photographs are conventionally held to be the most naturalistic of all image forms, yet this polar bear is shot with a wide-angle lens to dramatize the polar bear's environment in a non-naturalistic way. The power of the bear is diminished by the warp of the very limited horizon in the background.

The photograph is stock photo from the site Alamy.com. I haven't been able to verify the photographer, but I think it's Peter Barritt, who specializes in, among other things, photographs of great oil paintings. As Berger and Benjamin would have reminded us, the polar bear stock photo and the Gainsborough together are just images among others, but if we look at them properly, as Berger and Benjamin teach us, we can understand what they mean.