This is my response to the first assignment in the Architectural Imagination course I'm taking online from the Harvard Graduate School of Design. The assignment is to compare and contrast two buildings, which are unnamed in the assignment but will be recognizable as Le Corbusier's Villa Savoye and Frank Lloyd Wright's Robie House.

Pay attention to features such as: how the buildings meet the ground and sky; the nature of the "wrapper" or enclosing envelope (does it seem thick or thin, heavy or light, porous or solid?); how light and shade are used; and how openings, such as windows and doors, are organized. Discuss how masses and volumes are composed. 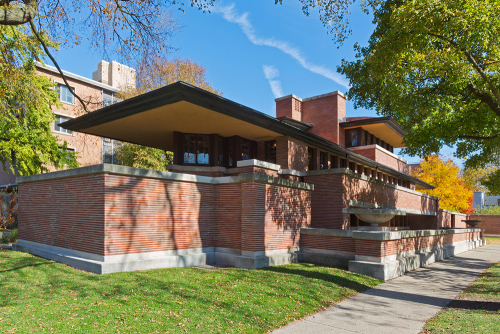 Here is my response:

The most striking point of comparison between the two buildings is their relationship to the ground. The second image, Wright's Robie house, rests on a stone base which levels out the uneven ground below it. The strong horizontal orientation of the stone base is repeated in the stone trim demarcating the first three levels of the house before giving way to shingled roofs. The land and the sky meet in the structure of the house itself. The massive chimney in the center of the Robie house further anchors the house to the land, forming a core around which the domestic life of the house is organized. The heavy brick and stone wrapping envelopes the house, protecting its inhabitants from the elements.

The horizontal quality of the Robie house invokes the wide-open prairies of the Midwest, yet the site itself is constricted by urban space closer to the spectacle of the 1892 Columbian Exposition than the open plains of Illinois. The contextual space is purely imaginary.

Similarly, the Corbusier house is also located in an imaginary contextual space within a very real urban setting. However, the space itself is imagined very differently. Wright used stone and brick to insulate his home from its urban setting. Le Corbusier extends the geometry of the Villa Savoye to the edges of the visible landscape. The white structure rests on thin steel columns on a wide plain of grass. The house doesn't rest on the land so much as it exists in a purely mathematical space. It is a classicism of Pythagorean geometry.

The Robe house is balanced, but the Villa Savoye is almost perfectly symmetrical. Both houses have long expanses of narrow windows. Le Corbusier places his windows on the surface of the wrapper itself. He also uses Wright's technique of using mass to center his structure. However, like most everything else about the Villa Savoye, the circular tower is so abstracted it's hard discern its exact function. The interior space seems partitioned yet lacking the traditional divisions between intimate and public space in a house–between the bedrooms and the dining room, for example.

The final point of comparison between the two structures is an odd one: neither house has a visible door. The most social element of domestic architecture is invisible. From where does a family greet visitors? I’ve entered the Robie house, so I know it has a door. When approaching a stranger’s house, the door is the first visual feature upon which you focus. Wright makes you search for the door. Le Corbusier doesn’t even provide a walkway from the street. From the image provided, the home’s owners must somehow materialize inside the house, emerging only to mow the lawn.

Both houses are autonomous structures. They pay minimal attention to the social worlds of their environments. The landscape has only three parts: land, sky, and flat plain. With its regular column widths, long expanses of glass, and flat white wrapping, the Villa Savoye is the product of a machine age. The Robie house is artisanal, all brick, stone and shingle.  Despite the differences in building materials, both houses are abstractions of a particular mode of making things.