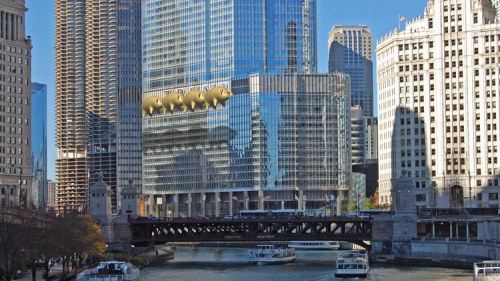 New World Design Ltd., a Chicago design company, has hatched a plan to have giant inflatable pigs hover beside Trump Tower in Chicago, hitting Trump right where it hurts the most–his brand. A couple of summers ago Trump plastered his name on the façade of his namesake tower, defacing a handsome building and irritating nearly every citizen of the city. In retrospect, it was a harbinger of things to come.

Anyway, the design firm is still working out the details of the installation, which is planned to be only for one day. It would be brilliant if the pigs could be permanent, but the Chicago River is busy at that point, so it's unlikely the city, despite its animus toward the president, will permit a barge to disrupt boat traffic for very long. The design inspiration comes from the concert props for Pink Floyd's Animals tour, which came to Chicago in 1977.